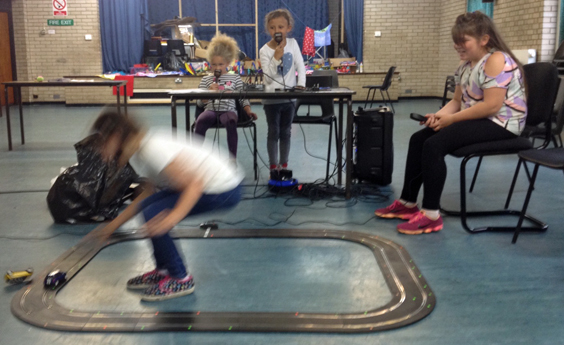 On Saturday a team of apprentice commentators from the Lyng Media Club take to the streets of West Bromwich as part of the Sandwell Arts Festival. A team of twelve young people aged between 5 and 12 will be on the streets between 12:00 – 15:00 reporting on all the goings on in the town centre during festival time.

We have had two training sessions – the group knew about commentators, a bit from football, but perhaps more enthusiastically from Wrestle Mania. So this was a start, but how to train them in the dark arts of street commentary was a significant challenge.

On Tuesday we tried lots of different mini speaking games and description challenges before I cracked open the dominoes. With eight members of the group setting up dominoes and four commentating of their efforts everyone was kept busy and on task in rotation. We took in some fresh air to practice commentating in the street before wrapping up by setting out a Scalextric loop and commentating on a series of one minute races.

On Thursday we did much the same session but increased the level of difficulty and introduced the microphones and mixing desk to proceedings. They were all better than on Tuesday and there were some lovely moments. Everyone seems to have enjoyed their training sessions, I’m not sure how much closer they are to being ready for tomorrow.

Pina Bausch’s Kontakthof is performed by three casts, the professional Wuppertal Dance company, a team of elderly amateur ballroom dancers and youth cast. It was fascinating and poignant seeing the senior version in Hannover, imaging the same material embodied by its original cast. The West Bromwich scenario is different we have very cast improvising their own material. It remains to be seen how skilled the cast can be in their execution and how robust the idea is to work if the execution isn’t skilled? On the flip side it remains to be seen what the cast’s youth will bring to the show that Craig and I as haggard old grown ups can’t hope to emulate.

Putting shows under stress is a useful way to learn about them and of course let’s not forget that giving the young people a great experience, extra confidence and some new skills is the least we hope to achieve and reason enough to be doing this. Thanks to Creative Black Country for the commission.