We so much enjoy being in a room with our audiences that it was always going to require something on the scale of a global pandemic to kick start Stan’s Internet Cafe.

In response to theatres being shut down we asked ourselves what performances we could make especially to be streamed that wouldn’t work as live theatre shows. So far we have three answers.

The Commentators have be mixing internet radio with live performance since 2009, so we knew they could come up with the goods. The Anatomy Of Melancholy takes a piece we have already made once for the stage and radically remakes it for streaming. Then, having learnt from these pieces, we made something brand brand new, For Quality Purposes, a performance with no analogue history.

We can’t wait to get back into the same physical space as you all, but until then, we hope that you enjoy what there is on offer at Stan’s Internet Cafe.

Streamed on The Commentators’ Mixlr account during July these recordings are now available as podcasts by searching for Stan’s Internet Cafe on your usual podcast platform or via our page at Anchor FM.

The Commentators have a long history of providing live sporting radio commentary for events which aren’t really sport and are rarely given careful such attention. After a 24 hour Scalextric cace, the World Gurning Championships, the opening of the Library of Birmingham, Birmingham Royal Ballet’s ‘The Nutcracker’ and multiple appearances at the Moseley Folk Festival, The Commentators present Film On The Radio.

The original music and dialogue are replaced with plot misunderstandings, attention to inappropriate detail, digressions, speculations and trouble describing action scenes. Films given the Commentators treatment so far are ‘Dirty Dancing’, ‘Psycho’, ‘Back To The Future’ and, as voted for by the audience, ‘Withnail and I’.

You can listen whilst pottering around doing your own thing or cue up the film and watch it in a whole new light synchronised to The Commentators’ commentary.

Film On The Radio will return in the autumn with some one-off specials.

Credits:
Performed by: Craig Stephens and James Yarker
Introduction music by: Nina West
With thanks to: Charlotte Goodwin and Robin Stephens.

A book documenting The Commentators many strange adventures alongside Stan’s Cafe’s other internet radio projects, Tuning Out With Radio Z and 24 Hour Scalextric can be bought from our shop. All profits from the shop go to helping Stan’s Cafe make more of the different happen. Thank you.

The Anatomy Of Melancholy: Episode 5 from Stans Cafe on Vimeo.

In 2013 we staged an adaptation of Robert Burton’s 1500 page long, 400 year old, encyclopaedic self-help manual The Anatomy Of Melancholy. It was a major undertaking that, as we grew drawn inexorably into this extraordinary book’s wonders, became a labour of love. When we started looking at what art we could make together in our separate spaces in order to keep ourselves from growing melancholy this was the one very clear candidate.

We have edited our stage production down into 35 Episodes, each performed in a single take with the technology we had to hand, in the intimacy of our homes. The beautiful, old, anachronistic text sounds strange in our contemporary settings and yet, amidst all the bizzarre outmoded ideas and stories, there is a warm and witty voice filled with compassion and much good counsel for keeping melancholy at bay. We hope you enjoy these humble offerings.

Credits:
Adapted from Robert Burton’s book by: the cast and James Yarker
Performed by: Gerard Bell, Graeme Rose, Rochi Rampal and Craig Stephens
With special guest appearances from: Charlote Goodwin, Atxarte Lopez de Munain, Esha Rampal Grimley and Robin Stephens
Music by: Christine Cornwell and Luke Deane
Post production work by: Rachel Bunce
Directed by: James Yarker
With thanks to: Jon Ward for his advice and Mary Ann Lund for nudging us towards this on-line idea.

The script of Stan’s Cafe’s stage adaptation of The Anatomy Of Melancholy, from which the video scripts are extracted, can be bought from our shop. It is significantly cheaper than the full Burton version, plus it will take less of your life to read. All profits from the shop go to helping Stan’s Cafe make more of the different happen.
Thank you. 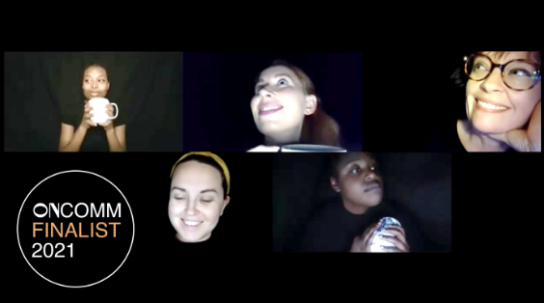 Streamed as live on 11 August at 19:30 BST this film is now available here with caption options.

For Quality Purposes is set in a Dispersed Universal Call Centre where call handlers, working from home, field enquiries from customers with a vast range of queries in areas they are rarely trained for or qualified to deal with. Our heroes are often left floundering but cheeriness is their default setting. Funny, touching and thoughtful, this play is devised especially to be performed online.

For Quality Purposes – (best heard through headphones) from Stans Cafe on Vimeo.