Stan’s Cafe is a group of artists from a variety of disciplines, but mostly theatre makers, working under the artistic direction of James Yarker. The company consists of an evolving team of long term collaborators and associated artists, the line up changes according to the project being worked upon.

Origin Story: Back in 1991 Graeme Rose and James Yarker, graduates of Lancaster University agreed to form a theatre company whilst eating at Stan’s Cafe, just off Brick Lane in London.

They wanted an unusual name, but one that wasn’t too aggressive, too posturing, a cheap joke, a bad pun or overly earnest. Station House Opera had always seemed a good name, mainly because they didn’t do opera. So there you go… Stan’s Cafe (pronounced Caff).

Birmingham: When Stan’s Cafe was formed the company could have located anywhere, but Graeme was from Birmingham and knew the city well. The place was cheap to live in and easy to tour from. There were no companies resembling the one they wanted Stan’s Cafe to be already in the city and they fancied being big fish in a big pond.

In the early 1990s Birmingham was in the middle of the enormous civic investment programme so it seemed like an energetic place to locate.
After working out of a shared house and later James’ bedsit Stan’s Cafe got its first office at MAC in 1997. In 2000 they moved to a first floor factory unit overlooking the railway just outside New Street Station. When that was demolished they moved to the Jewellery Quarter and in January 2009 they took over a vast corner of the A E Harris metal working factory. For a decade they ran this space as a venue, rehearsal space and storage facility for the local theatre community. After that space was demolished the company moved to its current space, Our Facility – an Edwardian school building in Selly Oak 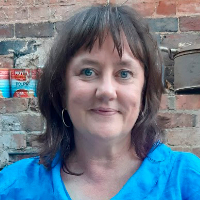 Michelle graduated a long time ago with a degree in Drama from Liverpool John Moores.  She headed for a career in venue management working at the Cheltenham Everyman, the Belgrade Theatre and then as the Operations Director at MAC for many years. She was part of the capital project team who worked on the major rebuild of MAC in 2010. She is also a trustee for Ecobirmingham.

Dave has a lifelong commitment to the application of the arts to the aim of social change, with education being the most fundamental component of the toolbox. He began his arts management career at The Roadmender in Northampton and quickly followed that with a period as Company Administrator and interim CEO for the touring theatre company of the East Midlands, New Perspectives. Dave is a musical practitioner and spent five years as Director of a Youth Music Action Zone leading teams of deluxe musicians in applying their practice to a wide range of community development objectives. He is a graduate of the Clore Leadership Short Course Programme, and has an MA with distinction in Developing The Arts In Applied Contexts. Away from Stan’s Cafe Dave continues to lead ukulele groups, teach music technology and lead on music production projects.

Craig graduated from Warwick University and gained an M.A. at Lancaster University. He has performed with a number of companies including Insomniac Productions, Plane Performance, Talking Birds, The Playhouse. He has also written for amongst others; BBC Radio 4, Talking Birds, Hamfisted!, Ludlow Assembly Rooms and Lichfield Garrick Theatre.

He first worked with Stan’s Cafe devising Simple Maths in 1997 since when he has been at the heart of most of the company’s activities. Craig became Associate Director in 2006, a move that acknowledges his creative contribution to the company, his direction of numerous small-scale projects and his lead of the company on tour in James’s absence. Other commitments with Stan’s Cafe led to him not being in Finger Trigger Bullet Gun and the casting requirements meant he couldn’t be in Made Up, but he can be heard in this production playing a DJ on the show’s soundtrack, he also wrote words and lyrics to form this soundtrack. 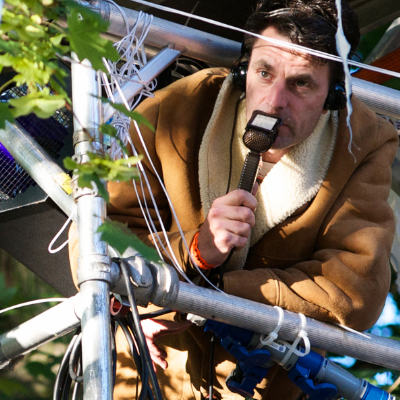 Gained a first class theatre degree at Lancaster University. He co-founded Stan’s Cafe in 1991 and has directed all the company’s significant productions since then. As a result of this work he has been invited to guest lecture at Universities across the country as well as to present papers at conferences and run many workshops at home and abroad. James was an attached writer at Birmingham Rep once but failed to reconcile himself to the notion of sitting at home writing a play – he is now detached.

(deviser / performer)
Rochi first collaborated with James whilst she was still at school, devising and performing in No Walls Just Doors as part of Stage2 youth theatre. She is now a freelance performer working regularly with companies around the Midlands. Her full Stan’s Cafe debut was in The Cardinals. Since then she has also appeared in Together With Love We Will Make This Citadel Glorious, Living Toys and Twilightofthefreakingods, devised The Anatomy of Melancholy, took a lead role in The Voyage, more recently she has joined the Of All The People In All The World team and partners Craig in the 25th Anniversary show Time Critical.

Steve is Director of Global Business Integrity for Wealth Management at Deutsche Bank. Before being recruited by the bank Steve had a long and successful career as a pilot in the RAF. His expertise in risk management makes him a reassuring presence on the Stan’s Cafe board.

Jo is Curriculm and Virtual School director at the Elliot Foundation and and OFSTED Inspector. She is a firm believer in the power of the arts to inspire students and improve schools. Before joining the board of Stan’s Cafe she collaborated with the company for seven years on various project at Billesley where she was Executive Headteacher. She is also a Board Member of Soul City Arts

CHAIR: Sanjay has been running his own PR and Marketing business for almost 20 years and has extensive experience in public relations, external communications, social media and wider marketing. His career in PR has allowed him to work with many businesses, from large corporations, SMEs, charities and voluntary organisations to raise their profile develop and implement effective strategies as well as worked on numerous national and local campaigns. He has also had numerous roles advising charities and voluntary organisations as well as being a governor (and ex-chair) at one of Birmingham’s most multi-cultural primary schools.
After five years on the Stan’s Cafe board Sanjay became Chair in December 2021.

Lindsey is Head of Sales and Marketing, mac Birmingham. After gaining an honours degree in English and Drama at Bristol University, Lindsey started work as a Training Co-ordinator with Zurich Financial Services, whilst also teaching at a youth theatre. She has worked at mac birmingham (Midlands Arts Centre) since 2001 as both a marketer and drama tutor, conveniently pausing to start a family in 2008 whist mac underwent a Â£15.2m redevelopment. Having also used this time to work at Warwick Arts Centre, Lindsey is an experienced arts centre marketer, also taking on the remit to manage sales and deliver commercial campaigns for mac’s Trading Company. She is fascinated by the impact of an arts centre on its community, and is passionate in her belief that everyone has the ability to be an artist. 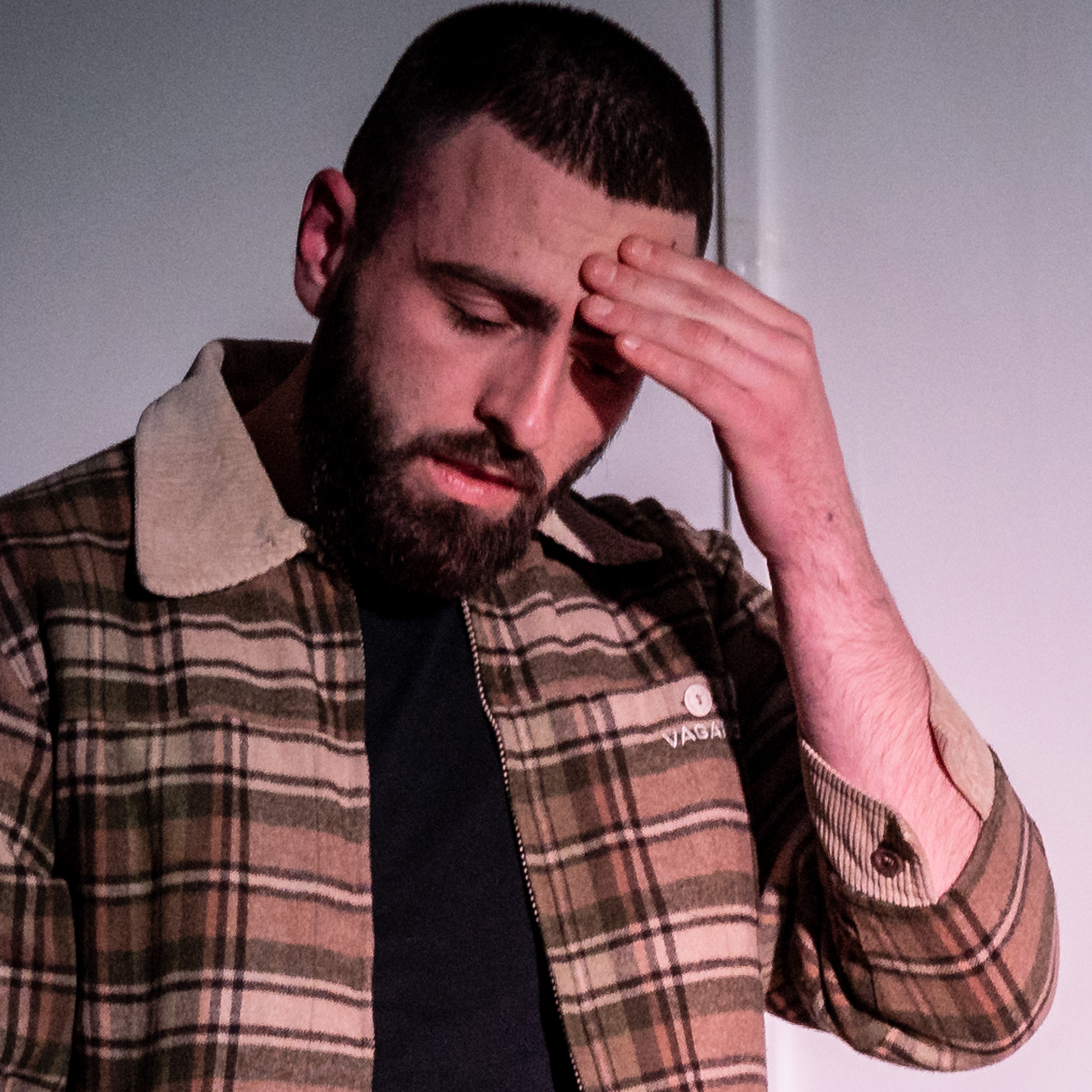 Dominic is a Brummie actor, writer and producer.

As part of the Stan’s Cafe team Dominic is producer of The Commentators and All Our Money and general fixer. He also directed Precious Emily with St. Matthews Church Of England Primary School while doing production work on other versions of this show. His first engagement with Stan’s Cafe was acting in C90 Qawwali: Emperor in Birmingham in 2021.

Outside Stan’s Cafe Dominic trained at Bath Spa University. His co-founder of Gritty Theatre. His theatre Credits include: A Midsummer Night’s Dream, About a Goth (National Tour), Bones (National Tour), Bottleneck, Chapel Street, Death of a Clown, Descent, Dogs of War, Doppelganger, Four Play, Fred and Ginger, Glory Dazed, Lord of the Flies, Night before Christmas, None of the Above, The Heat is On, The History Boys, Mr Muscles and Yen.

Feature films include Brumville, Certified, The Day That Broke and Thy Name is Woman and shorts include Adam Y, Betrayal, Breakdown, Cut Loose, Gangs of Birmingham, Gangsters Parasite, Initiation, It Was Us, Just Two Drops, Martyr, Lost in the Desert Wild, Kobe, Scratch That, Stranded, Trickshot and The Return of the Ring.

(advisor/producer)
Nick acted as Advisory Producer for Stan’s Cafe from 2003-2013. His first contact with the company was in the mid ’90s doing consultation work for Arts Council England, intermittent contact developed into a committed ongoing relationship. Nick helped the company greatly though a significant period of evolution and remains a key soundboard for the company and is currently working with us as a producer.

He was a founder member of and Producer for Improbable he now works principally for the Javaad Alipoor Company.

Lucy currently works with Stan’s Cafe as both an Associate Artist on Creative Learning Projects and as our part-time Administrator. As if this weren’t enough to do she is also a founder member of and director for Paperback. Lucy also worked as Assistant Director of the acclaimed adaptation of The Lovely Bones.

All the people in the cafe..