Below is an account of an INSET session run for 70+ teachers and pupils at Arrow Vale School in Reddich. The brief was to prompt people to look at things from new angles. Our intention was to throw lots ofideas around and leave teachers to draw on those they felt able to adapt for theirclassrooms. This session was commissioned by a member of the management team who hadattended Exercises for Teachers, as a resultmuch material is shared between these sessions.

Warm Up.
Walk around the hall weaving in and out of each other trying not to bump into each other. As you passpeople shake their hands and say “Happy New Year”, you must always be holding someone’s hand.

Roman Numerals.
In your new groups using your bodies represent the following numbers in Roman Numerals:
This year.
Last year.
1999.
1066.

Binary.
Now switch for Binary (Base 2) Notation and use your bodies to represent:
14.
42.

Within these groups participants rotated through four of the following tasks:

Find a deserted corridor and move to stand at one end of it. Now imagine that gravityhas shifted 90 degrees so what was a corridor now resembles a chimney.

Your only escape is through the ‘topmost’ door of this chimney work out physically how youwill climb up to get out (you may choose to imagine lose items, like litter bins are bolted down and so haven’t crashed down on your heads in the 90 degree shift). Ideally you would all actthis scenario out as a disaster movie, but we imagine some of you may be shy, in which caseit would be great if shy ones could act as directors / stunt coordinators for the less shy.

Imagine you are making a film on one of the following topics:

Unfortunately your budget won’t allow you to film on location or use good special effects, in fact everything will have to be shot in your house using stuff that’s lying around. You are going to have to be inventive as to what you use for special effects.

Draw key scenes from your film on the storyboard and annotate them explaining what domestic items are representing the natural features in your film. At the end of the task leave yourstoryboards in this envelope.

Create a sentence using the flash cards laid down in a line horizontally.Start building a matrix by adding nouns above nouns, pronouns above pronouns, adjectives about adjectives Etc. Now read across the matrix looking at all the different sentences that you can create from this basic sentence structure.

One member of the group, with their back to the others, should imagine themselves stood outsidetheir front door. They should then imagine themselves following the directions given to them by another member of the team and describe what they see when making this imaginary journey (theyshould try and be as accurate as they can). If asked to go in an impossible direction (ie straightacross a T-junction they should decide either to request a different instruction or to imagine wherethey would come to if they followed the impossible direction. Those listening to the descriptionshould draw maps of this journey.

After a suitable period the maps should be compared both to each other and to reality.

Discuss how this task could be altered to make it more challenging, interesting or accurateand try this version out on each other. One possibility may be to allow questioning from thecartographers during the description.

At the end of the task leave your maps in this envelope.

Using only the English Phrases found in these phrasebooks create one of the following dramatic scenes:
– A couple declare their love for each other.
– One person seeks to buy a gun from the other person.
– Someone explains that is going to be an earthquake.
– Explain that you have come from another planet.

Note that there will not be a special section for what you want to say in the phrase book. You will have to be very inventive and cheeky in how you use one thing to say another thing.You may choose to only have one character in the scene speak in phrasebook language.

Write your scene down and at the end of the task leave it in this envelope.

P.S.
This excercise was one of the two key formal constraints through which we made our showBe Proud of Me. The excercise can provedifficult at first but rewards persistance. Again we enjoy audience’s catching up withwhat is really going on. It is easy to make the results comic, the great thing is if youcan make them strange and scary as well. You can thing of other scenarios and script themusing the same constraint.

If you have time discuss your responses to the task and set yourselves a new challenge, avariant on this one.

P.S. This task was inspired by people’s strong response to or sensory art installationThe Black Maze.

Imagine you are editors of a British newspaper and the following events all happened on the same day:
– The Moon Landings.
– The Discovery of Australia.
– The Great Fire of London.
– Tobacco is imported into the UK for the first time.
– The Russian Revolution.
– The terrorist attacks of 9/11.

Decide which stories will feature on your front page and then mock up what it will look like.Obviously the task requires you to reinvent history and there is no correct answer but the discussion should be interesting. At the end of the task leave your front pages in this envelope.

Take your miniature people and a camera out of this room.

Look at Your School from the miniature perspective of these people so the whole building turnsinto a land of adventure and extraordinary scale. Carefully place the figures in dramaticsettings and photograph them there (remove the figures once they have been photographed).

P.S.
We first used this exercise, a method for helping people look at the world around them in an new way,with St. Alban’s School in 2006.

In pairs, sit side by side one partner facing the room, the other facing a wall. The personfacing the room should provide their partner with an audio description of what is going on inthe room. Discuss and swap roles.

This description could take the form of:
– a sporting commentary.
– a spy reporting to a spy master.
– a news reporter at a tense event of national importance.
– an alien reporting home (speak English but don’t know what objects are called).
– a wildlife presenter.

P.S.
This task was inspired by our unusual project 24 Hour Scalextric.

Split your big group into smaller groupings and without reading the instructions in advance decide whether to do Task A or Task B. Complete the task and share yourfindings. Leave your drawings in the envelope a the end of the task.

Task A
One person in each group should take off a shoe and sock and draw round their bare foot.

Now create a new reflexology map for the current times. Give different areas of thefoot names and identify what they relate to. By manipulating these areas of the feetmaybe many new problems can be solved.

Task B
One person in each group should draw around their left hand. Now create a fortune telling map for the 21st Century.

Split your big team into two smaller teams.
Each small team should choose one member to be blindfolded. These two blindfolded people arethe ‘machines’ they should sit at the same table as each other.

The remainder of each small team should split themselves in two. They will act as instructors.Without telling their blindfolded team-mate, the instructors should agree an arrangementthey want built from four of the empty cassette boxes.

The instructors should position themselves a minimum of 4m away from their ‘machine’ one directly to their left or right with remainder directly in front of their ‘machine’ so they have perpendicular views on the table.

The ‘machine’ should build a simple structure agreed upon by the non-blindfolded group members. The ‘machine’ should only move as instructed by the observers, displaying withno capacity for problem solving – for example the instruction “pick up the cassette” should not be acted upon, but the instructions “open your fingers, lower your hand, close your fingers,raise your hand” should achieve that action.

P.S.
We developed this exercise whilst devising our show Ocean of Storms but never found it a place in the show. It is however a great challenge for communication skills and physical control. A larger version of the exercise is to have multiple teams trying to navigate blindfolded ‘astronauts’ arounda school hall littered with chairs and tables.

We barely touched on how these exercises could be used in school or what they demand of students. You,after all, are the professionals in this department. 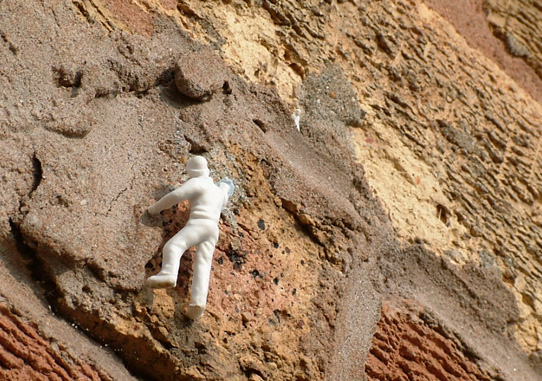