Good and True was a show made in 2000 which then toured sporadically until 2004. In the early photos I’m the guy in the chef’s hat. In the later photos Im the guy with the little beard and the chefs hat. I grew the beard not to fit in with the show, but to fit in with another show. But I kept the beard because I started to believe it was a profitable beard. Ever since Ive had the beard I’ve had more work and less debt. So now I’m scared to shave off the beard even though it makes me look like a twat. It’s the most stupid thing about me, I think, and other people think that too. I may have a decent chin under this, but no one’s seen it for five years, six actually, because, in my head, the beard’s keeping me in Taste The Difference fish pies from Sainsburys. Something pre-beard I struggled to afford.

This is magical thinking and no grown up person should entertain magical thinking but a surprising number do. Especially in theatre, and also in sports. In sports there are cricketers who have lucky, I don’t know, boxes is it? Those things that stop your nuts from getting hit by a cricket ball. I don’t know anything about cricket, I don’t know why I’m getting into this. My area’s theatre, and magical thinking is prominent in theatre too. This is because in theatre the factors which determine the success or failure of a project are so complex, there’s the feeling that it’s impossible to have total control over them. There’s talent of course. That should get you some way to success. But only an idiot believes that talent is enough. You need a bunch of other things too, most of which are mysterious and unknown or just plain shameful. So this complexity creates anxiety. The anxiety is further fed by the experience of delivering exactly the same show to two different audiences to find one loving it and one hating it. The reasons for this could probably be explained by a team of physicists and psychological profilers working round the clock for a decade, which is a waste of everyone’s time, so for me, its easier to put the success of one performance down to something like a jolly good beard, and the failure of the other performance down to the absence of a jolly good beard. The creation of a false certainty is better than no certainty at all, isn’t it? Its pretty common this. There’s a guy I know who has to wank into a cup before going on. He’s often in work too, that man, and in the past has done up to 300 shows a year, and he’s not a young bloke. Not sure he’s still acting actually. Can’t say I blame him, poor sod’s probably knackered. Point is, though a wank into a cup is less common, the principles the same – we all have our rituals.

In Good and True I got into the mindset that a successful show required a brand new white t-shirt for every performance. This started because I bought a new t-shirt for the 1st show, the t-shirt came as part of a pack of two, I wore the 2nd new one for the 2nd show, and both shows seemed to go off alright. So there you go, the placebo effect in place, and that was the pattern for the rest of the tour. Good and True performed around 3 dozen times all in all, and now, in my chest of drawers at home, I have 3 dozen white t-shirts. The cheapest I found was in Manchester where I got 3 for a tenner. The most expensive cost me over 20 quid when the show performed at the Linbury in Covent Garden. Doesn’t even fit me properly that one. To my horror, during one of the Birmingham Rep performances, I discovered that my t-shirt was previously-worn, and as soon as I realised this, my nob popped out on stage. As it happens I was sitting at a table and wearing a dress during the part of the show where I pretend to be Sarah’s mother, so I was able to tuck it back in, and out of they way, and I’m pretty sure no one noticed. But the power of the magical t-shirt is plain.

I tried to determine if the other performers in Good and True were caught up in this kind of crap, and at various points I made myself believe that Amanda’s lucky thing was needing to be the last person to get into costume; Sarah’s lucky thing always wearing a particular shade of lipstick; and Craig’s lucky thing was to leave a turd in the lighting box (I got that quite wrong as it turned out, Amanda and Sarah didn’t have any rituals and Craig told me he just needed to be pissed out of his brains. Not sure where the turd came from, that might have been a one off). I don’t think this leaves my thesis in tatters, rather it shows how performers might keep this kind of thing hidden (like the wank-in-a-cup guy who I wouldn’t have known about at all but for a faulty green room lock).

Good and True has finished now, and I find I don’t really do much acting anymore. I’m in a bit of bind as to whether this is because I’ve taken to over-trimming the beard (to the point where it sometimes exists in a strange hair/art hinterland, a phenomenon known as going a bit Craig David), or that I’m not permitted by my family to buy any more white t-shirts, or that my nob was indeed noticed on stage and I have become unemployable. Thing is, the magical thinking is still a feature in my life, because I’m sitting here typing this in response to James Yarkers request to supply an essay on receipt of which he will give me forty pounds. FORTY POUNDS! If I can knock this off in half an hour that’s a bloody good rate of return. Is it no coincidence that I haven’t trimmed this week and suddenly I’m quids in? Jeez, I don’t know, I reckon Samson must have gone through up-and-downs like this. Sadly, though, this essay has not taken half an hour, its taken me a week, and to borrow a phrase from esteemed Stan board member Peter Fletcher, that return is sub-optimal, so I don’t know where that leaves the beard hypothesis. Nowhere, say trusted pals, grow up, you prick. Well that’s easier said than done. James also didn’t specify what the point of the essay should be and has left that down to my own judgement. I don’t know what the visitor demographic of this website is, but I assumed that this essay might be read by emerging performers interested in the company’s work who would find tips from an old theatrical pro useful in their careers, but reading back, I’m not sure it is that useful really, unless it’s to t-shirt manufacturers looking for new markets. It occurs to me now that it might be read by possible commissioners of Stan’s Cafe work in which case I may have misjudged the tone. Either way, for those who didn’t see Good and True it was very much an iconic piece of theatre characterised by both whimsical and profound ideas, beautifully judged performances, and a stunning brilliance of t-shirt. I saw Forced Entertainment recently and their t-shirts were a disgrace, frankly. 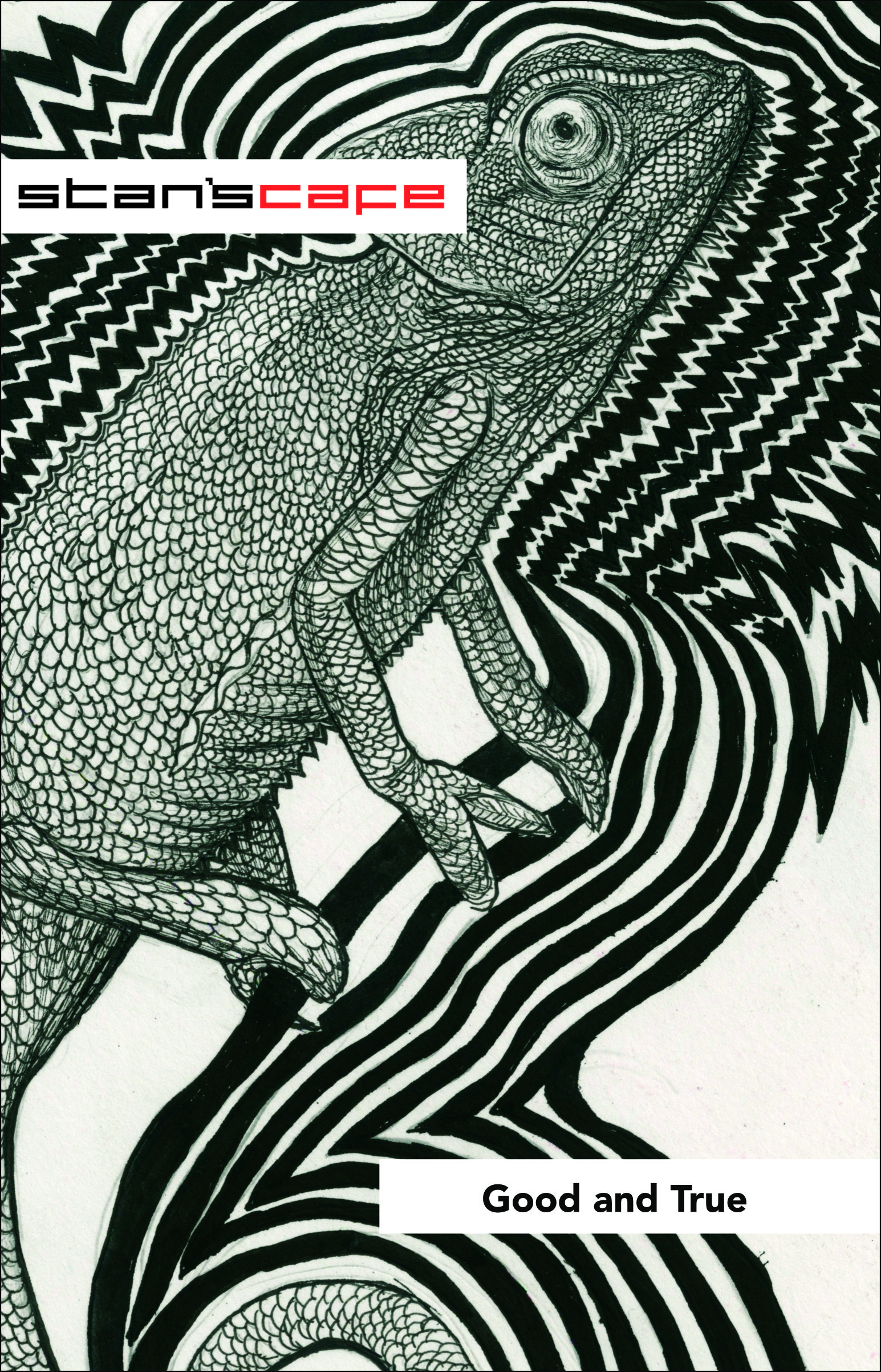 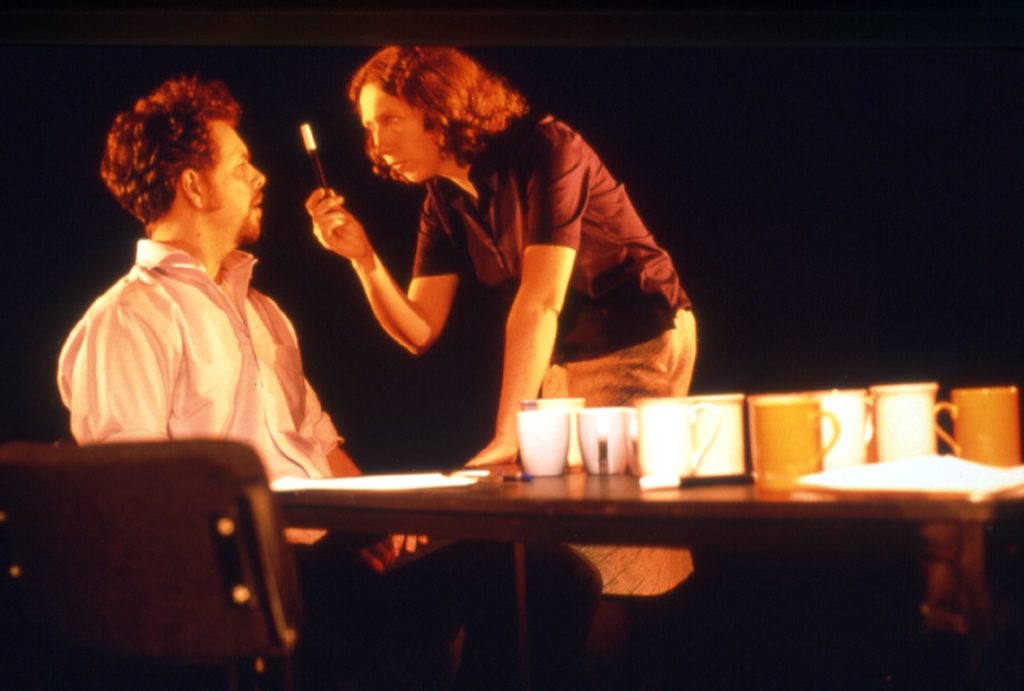