Over 30 years into directing Stan’s Cafe and I’ve never felt like Hollywood producer, until we started devising Precious Emily. Suddenly, faced with the annoyance of historical veracity and the spectre of an audience who will at some point want to go home to eat their tea, we’ve been cutting and splicing biographical truths like we’re wannabe movie moguls.

Naming: For speed we cut a scene in which Precious is given his name by two older brothers in recognition that they’ve just experienced the death in infancy of a sister called Beatrice. For simplicity we don’t mention the two brothers at all.

Father/Crocodile: Our first performance contained a visual sequence in which Precious’ father is killed while hunting a crocodile. While this is a true and dramatic episode we cut this for the second performance in order to get into the story more quickly.

Abusive Foster Mother: We simplified Precious’ early life by depicting just one of many foster parents. In deference to audience sensibilities we radically toned down the level of abuse Precious and his sister Gloria we subjected to as children.

Letter Of Recommendation: Late in rehearsals we cut Precious receiving a letter of recommendation from the orphanage he was brought up in which he showed to prospective employers. I’d been attached to this detail because students were normally allowed to leave when an apprenticeship had been arranged for them, but Precious was eager to leave and Father Lazarus was rightly confident he would be able to fend for himself without the apprenticeship.

Introduction To Weightlifting: We ignored the fact that Precious attended Kevin’s gym for the first time because his brother Lesley was training for a training for a championship fight there.

Getting A Job: Precious talked his way into a factory boss’s office in order to get a job. We simplified this. Many schools staged this more accurately in their versions by having him sneak into the office.

Pay Increase: In South Africa the minimum wage doubled when workers reached the age of 21. Normally this lead to them being laid off but Precious was so productive he was kept on. We boiled this down to him being paid two pay packets on his Birthday.

Elizabeth: Precious met his future wife Elizabeth at Coach Kevin’s house, she was not Kevin’s niece, we just found it easier to say she was.

Weight Lifting Competitions: Precious did drive through the night and have a crash on his way to a weightlifting competition in Cape Town. He was also barred from a competition he had been invited to lift in and instead operated the scoreboard. It is true that on this occasion the crowd refused to leave until Precious completed demonstration lifts. For convenience we combined these two events.

Francois Freeman: We are confident that Eddie Gafney was selected for the South African weightlifting team in front of Precious McKenzie but we made up the other athlete’s name when our research failed to turn up the real name.

Children: In our show, for ease, Elizabeth and Precious have one child – a baby which never grows older. In truth their eldest child Sandra did grow up and by the time Elizabeth joined Precious in England they had two children.

One Gym: Emily discovered her love of weightlifting at Leeds Beckett University not Cyril Martin’s gym. She moved to the Atlas Gym to train with Cyril when she got serious about weightlifting.

Discus Not Shot Put: Emily did throw the discus a startling distance one sports day and subsequently took it up as her main sport, however by the time she had to choose whether to switch to weightlifting her main event was shot put. For clarity of storytelling we don’t mention shot put at all.

Sister Kelsey: Kelsey is younger than Emily and the timeline of her celebrating getting into the Jamaican swim team at the same time Emily is choosing between discus and weightlifting does not match up. That is artistic license.

Living At Home: In an effort to get the show’s running time down to 60 minutes we cut Emily balancing work and training and her missing out on time with friends and her friend’s loyalty. In the Epilogue we mention that Emily’s Olympic silver medal allowed her to move out of her parent’s house but we cut a moment in which her parents allowed her to give up work in order to prepare full time for Tokyo. Late on in rehearsals we cut a scene of Emily training in her garden in lockdown with her coach giving advice using FaceTime. We also cut a scene we very much liked with Emily building relationships in the gym – a scene that included an amusing gag about an unhealthy breakfast baguette. 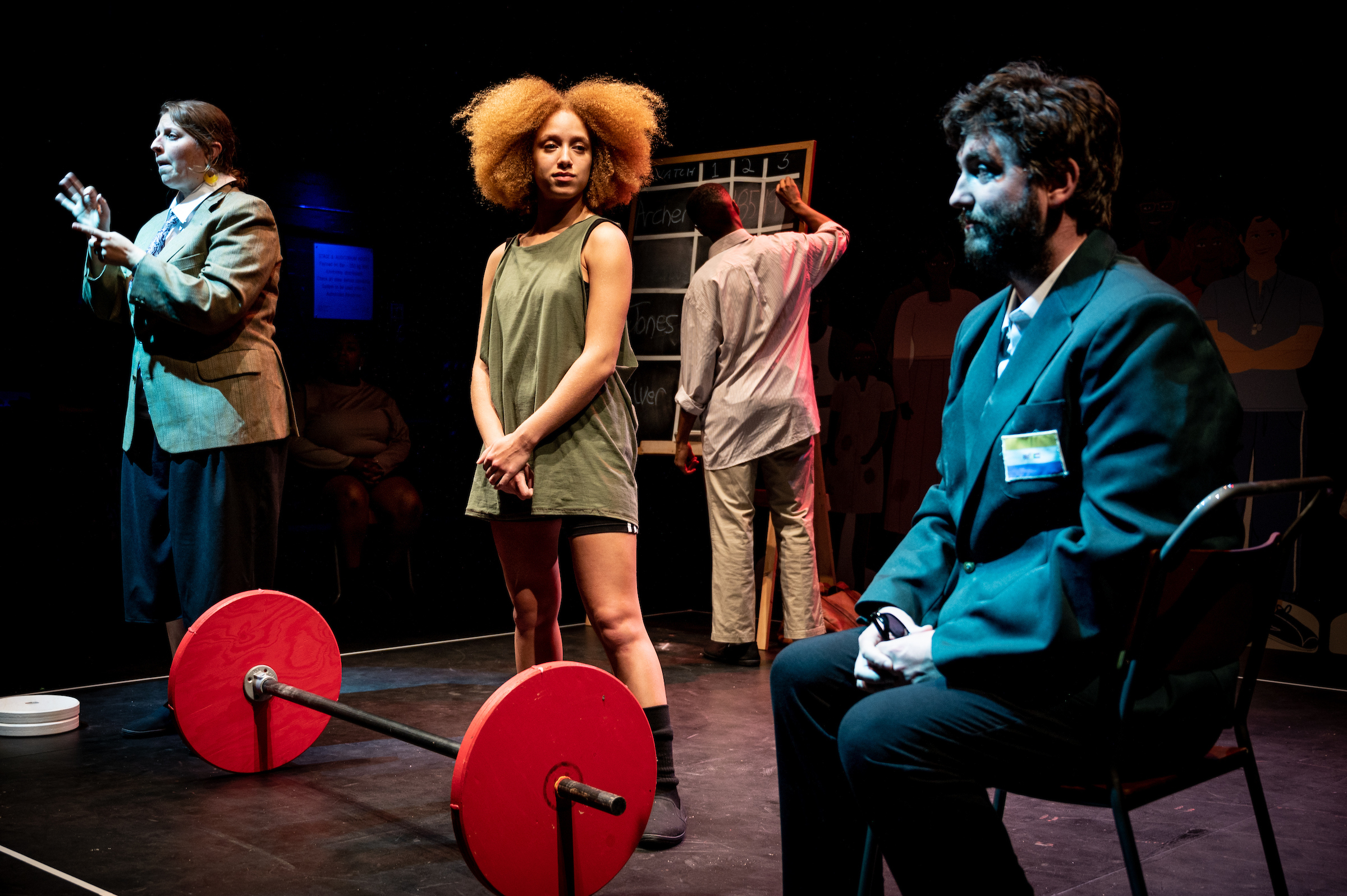