Three Cardinals in crimson robes are on a mission of evangelism. They are on tour with a puppet show they have made that sets out their abbreviated and extrapolated reading of the bible.

The reading is abbreviated as it stages only a relatively small number of scenes key to their message of redemption; it is extrapolated as its reading of the book of Acts and Revelation include elements of contemporary history. Our theatre show is slightly bigger than the Cardinal’s own puppet show our real audience (as opposed to their fictional audience), can see what is happening in the wings, how they collaborate and argue, how they are both aided by and in conflict with their young female Muslim stage manager.

The Cardinals is essentially a visual show performed without words. The Cardinals have no puppets to speak of so enter the puppet stage themselves. The sincerity of the Cardinals, the seriousness of their intent and their theatrical naivete makes the show simultaniously very funny and strangely touching.

The show has many themes with Belief chief amongst them. The Cardinals ask us to ‘believe’ whilst classically the theatre asks us to ‘suspend our disbelief’. The show is in essence very simple, it tells well-known Bible stories in a simple, beautiful and compelling way. We have been asked if the show is ‘controversial’ which is an impossible question to answer definitively because we cannot answer for other people’s personal instincts. We hope the show is provocative but not controversial. We are not seeking to argue for or against religion but hoping to prompt people to consider their relationship to religious faith.

… At its heart, it is a wonderfully thoughtful and intelligent piece, alive with colour and theatricality, childlike humour and troubled humanity….

A scream starts The Cardinals; another will bring this piece to a close. ‘Ite missa est’ (the mass is said): the prophecy of the Apocalypse has been realised. Meanwhile, 3 cardinals impeccably dressed of red (at least at the beginning) have told us their vision of the world (since its creation). Their frame of reference? The Bible (ancient and new testament) ‘expanded’ with historical events (the Crusades, the situation in the Middle East). And to support them, those Eminences have a precious helper: a veiled Muslim woman.

This show is faithful to what we know of Stan’s Cafe, an associate company of the Domaine d’O since 2 years ago. The British collective employs but a few words (in French or Latin imitation) and deploys an ever-great visual flair.

The ‘story within the story’ is the key to this creation viewed on Tuesday.It is thus on a puppet theatre that the Cardinals present their story. They, the puppets in this little theatre, become Adam and Eve, Abraham or a Palestinian suicide bomber. But they are also puppeteers, making use of the props that lay on the stage, cardboard sheep, tanks and multiple fabrics, that they use on the set to great effect.

It is thus on a puppet theatre that the Cardinals present their story. They, the puppets in this little theatre, become Adam and Eve, Abraham or a Palestinian kamikaze. But they are also puppeteers, making use of the props that lay on the stage, cardboard sheep, tanks and multiple fabrics, that they use on the set to great effect.

Admittedly, to appreciate this ensemble, some prior knowledge of the Judeo-Christian culture would be a plus but the events and tableaux, presented in many details, are crammed with possible interpretations. The mime-actors win our support and even if we don’t understand everything, we laugh, at times are moved (ah Judas!). The end of the piece, a bit brutal, has all of a ‘pirouette’/u-turn. As if our cardinals cannot extricate themselves from the mined field that is the Middle East and that it is more about reminding us of the role of the Bible in the construction of History. Can we believe it?

At the beginning of the performance of The Cardinals in Greyfriars Kirk in Edinburgh, the three cardinals huddled together for a moment of private prayer. Some words of their prayer drifted into the hearing of the audience, as far as I can recall they were muttering things like, ” bringing the light of truth to heathen Scots in the North”. It was a clever way of winning an audience from the very start, a sort of recognition of context. The context was Greyfriars Kirk, the first Protestant Church constructed in Edinburgh after the Reformation of 1560. So the cast got it just right. I think it was GK Chesterton who said that the test of a good religion is if you can laugh at it. We Protestants have been guilty of taking ourselves far too seriously for years and gentle mocking is always to be welcomed. The whole performance had a refreshing take on the serious issues of faith, relationship and culture.

As a minister, I spend a good deal of my time suggesting to people that not only should we not take ourselves too seriously, our faith should never mock our intelligence. Sometimes, without the capacity for metaphor religious ideas and the propositions of Biblical events, if they are portrayed literally, can make us feel that we need to leave our intelligence at the church door. If you took Tony Bennett’s song about leaving his heart in San Francisco literally, the song would have been banned years ago as the description of something quite grotesque. But we all know what he is getting at and the song has all the more power for the use of metaphor. Why can’t we be more like that in our faith?

The naive seriousness of the cardinals and their relationship with the female Moslem stage manager was just wonderfully played and I felt that all four characters were strong, each had a very powerful presence, and the whole conception was quite brilliant. I felt proud that Greyfriars was associated with this production because the portrayal of major Biblical events in a quite factual straightforward way did not lose any of the serious issues and challenges that lie behind the Biblical narrative. Somehow the gymnastics and prop shifting that was required by the actors in order to portray the stories seemed only to emphasise this juxtaposition. For example, the scene of Judas betrayal was very moving and at many other moments one felt that the nub of the challenge of faith was being addressed in spite of the clutter and near impossibility of presenting the scenes. When Jesus walking on water indicated that he was getting a bit knackered and needed the scene below shifted, I thought that was quite brilliant. To me faith is not a challenge to people about what they chose to believe or not; as though it were just a matter of opinion and an invitation to suspend our intelligence in order to accept certain supernatural phenomena that break the laws of physics. Rather faith is about what we choose to put our trust in and about how we choose to spend our days and order our priorities.

So, far from mocking faith, I believe that this play got to the nub of what it is all about. It was a moving and powerful piece of theatre and I would recommend any thinking congregation to welcome it as a piece to be performed in a church. I would recommend it too to anyone who thinks that religion is pure delusion. Beyond the mythology and the alternative paradigms that constitute a Biblical world view, the themes at the heart of the Biblical narrative and at the heart of The Cardinals go to the very nub of what it means to be a human being today. The closing scene of the apocalypse very powerfully brought that together. A wonderful concept, professionally and thoughtfully put together by a hugely talented team.

“Cardinals at d’O.
The English collective Stan’s Cafe, associate company of the Domain D’O, presents […] its last creation The Cardinals. This piece stages the Crusades and the Deluge and more generally the Catholic religion; themes treated by these fellow travellers, with offbeat humour, depth and a great visual flair.

A creation directed by James Yarker, in which the characters, dressed in monastic crimson of cardinals, pace the length and width of the stage of a big puppet theatre… All is ready for the show to start… but the puppets. The Cardinals decide to take to the stage themselves to interpret those puppets. Satirists through and through, sarcastic and even at times stern, these cardinals are the quintessence of an English humour so difficult to pen down.

Here, those unique princes of the Church recount the story of Catholicism. A red carpet of events references as much the crusades as the multiples miracles of men of faith, all in a language incredibly comprehensible. But the great strength of those cardinals is visual. Instead of puppets, the actors metamorphose an arm, a leg, parts of their body with great theatrical effects, thus revealing an astounding and hilarious vision of the ecclesiastical world.”
Gazette Economique et Culturelle, Montpellier

..The Cardinals christens itself an exploration of faith and religion, though the main theme that jumps out is a celebration and interrogation of performance. The company certainly captures the pomp and ceremony, as well as the glittery campness, of the Catholic Church. There are several ideas hinted at here – the violence that has marred and shaped the last two millennia in the name of religion, contrasting with the inter-faith co-operation that is the puppet show, for example. As for a definitive sermon to take home, however, these cardinals are keeping fairly quiet…

Your show was one of the first things I saw at Greenbelt and remained a highlight – and there was plenty of competition from lots of other things on the programme. Immensely clever and thought-provoking with some great iconic imagery. Goodness knows how you ever came up with the idea!

I agree with the above comment. The show was the first thing I saw at the festival and has really stuck in my mind. I need to see it again as there was so much to take in and process. Humorous, poignant, devastating, thought provoking, beautifully crafted visuals and acting – brilliant, thank you!

As ever, thanks for a wonderful evening. The sense of imagination and humour your company brings is invaluable and provides sanity. In the spirit of Brian I have to say that you are all very naughty boys – and that Terry Gilliam would be proud.

I am writing to you to thanks you for your play, the Cardinals, which I saw last night in Plymouth. It was very well devised and brilliantly acted.

“…wonderfully hilarious…sharp critique of religion – then and now. And brilliantly funny…”

“You won’t see anything like @stanscafe The Cardinals at Greyfriars Kirk. Extraordinary #EdFringe”

Dr. Matt Sergie on The Cardinals 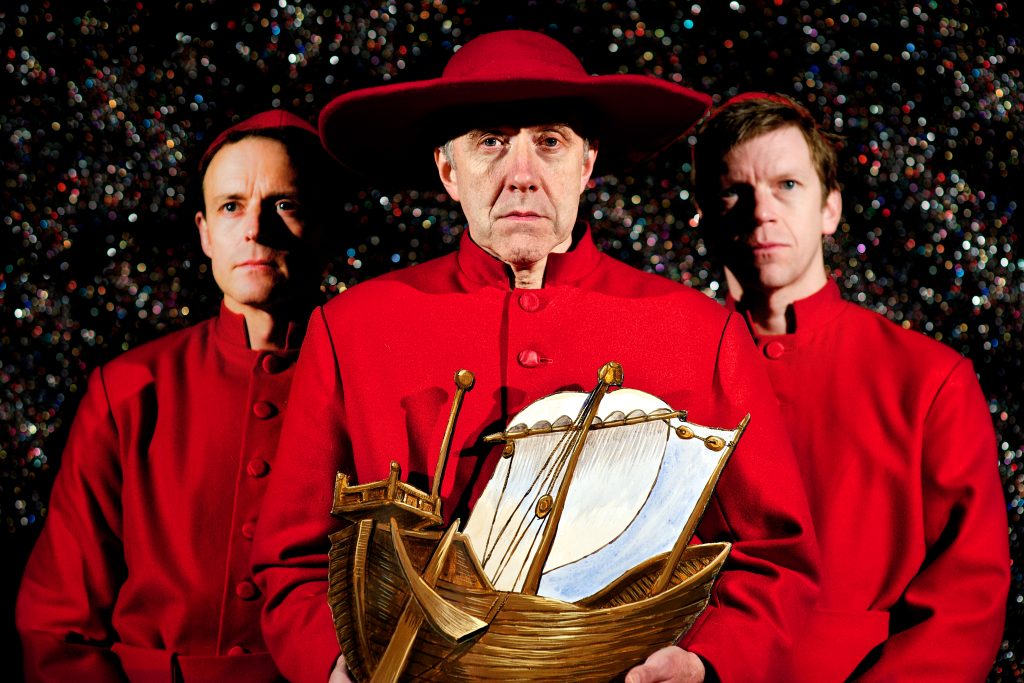