MEDIEVAL COUSINS TO THE CARDINALS: A RESURRECTION

The ideal audience for The Cardinals died about five hundred years ago.

Were they still with us, I imagine that our medieval predecessors would see reborn in The Cardinals some of the primal and uneasy reasons why anyone ever bothered to make or see live drama in the first place. They wouldn’t care as much as we do, or at least not nearly in the same way we do, about the religious content.

As a historian of medieval English drama, I spend most of my day trying to see plays as long-dead audiences might have. I specialize in biblical cycles – that is, a series of live dramatized Bible stories, presented in chronological order, from Creation to Doomsday. You might know them as “mystery plays.” The simple resemblance between The Cardinals and those medieval cycles is immediately obvious from the show’s précis: that’s why Toronto’s Harbourfront Centre World Stage invited me to join James Yarker in a pre-show chat when they hosted The Cardinals last March [2015].

During the chat, I shared a comparative chart of the medieval cycles’ resemblances to each other, which have confounded some theatre historians: why did these very different English cycle traditions, which do not seem to be textually influenced by each other (nor by a consistent common source other than the Bible), happen to choose nearly all the same Bible episodes – when the medieval Catholic Bible offered hundreds of episodes to choose from, many of them equally well-known and readily dramatized?

James quietly looked down the list – and ticked off most of the items. Stan’s Cafe had developed the show without any direct reference to the medieval cycles, drawing directly on biblical texts instead, just as the cycles’ makers did. In its selection of biblical episodes alone, The Cardinals turned out to accidentally resemble the medieval cycles nearly as closely as they resemble, mysteriously, each other. All these playmakers, I now realize, were at least driven by a search for what medievalist scholars now call typology-roughly, when an early event resembles a later event closely enough to seem like a prophetic allegory, a metaphor from the past for something that had not yet happened. Both the cycles and The Cardinals use playful (and sometimes provocative) anachronism, inserting present-day music, images, or phrases into the past. All end their depictions of history with episodes that extend into their present day, and then into their idea of the future.

That immediate resemblance might mean that playmakers, then and now, pick up Bible stories when they see certain biblical (and apocalyptic) portents emerging around them, at their current moment in history.

As my University of Toronto students and I stayed to watch the show itself, deeper resemblances emerged, most of them also apparently accidental.

Biblical plays were commonplace in medieval Europe: passion plays, nativity plays, and so forth. They still are commonplace.

Organizing those single-episode plays into long-duration cycles is a much rarer practice (though we used to think it was the norm). In Britain, it seems to have started in the mid- to late-fourteenth century, with repeat performances happening every few years (or sometimes every year?), generation to generation, until Protestant reformers drove the last cycles from the North (they were then perceived as a persistent Catholic tradition) in the 1570s.

In any given year, the cycle at York had up to 52 distinct biblical episodes, each produced and performed by a different craft guild or fraternal organization, all on Corpus Christi Day. The plays were repeated at public outdoor sites across the city, using mobile stages on wagons. Unlike The Cardinals, these short plays had dialogue, in Middle English verse – all packed into one day. Specialists believe the full day of performance extended from well before dawn until midnight. The guilds of Chester had a similar Corpus Christi play cycle tradition in place by the 1420s, but it moved to Whitsun Week in the early sixteenth century: by then, it had already become a three-day event. Scholars believe that Cornwall‘s Ordinalia also lasted three days: the surviving Cornish script covers a similar range of biblical history, though we don’t know much about its production history. The mysterious Skinners’ Well/Clerkenwell performances (the scripts are lost), staging both Old and New Testament material just outside the London city walls to the northwest, seem to have taken three to five days.

For a modern audience, The Cardinals‘ 100 minutes with no intermission – of a straightforward show with no dialogue and no Aristotelian dramaturgy (no rising action, no decisive climax) – can feel epic in its length. Granted, no medieval audience member would have felt compelled by courtesy or convention to watch a play through from beginning to end with no breaks – the surviving cycle scripts seem built to accommodate a crowd that comes and goes as it pleases. In both cases, playmakers create a sense of grand, sweeping duration, setting the right tone for a theatrical history of the universe.

In its programme materials, Stan’s Cafe explains the Cardinals’ silent play-within-a-play as a “puppet show [with] no puppets to speak of,” using instead the Cardinals’ own bodies to build its stage pictures. Fair enough: for modern audiences, puppet shows provide the closest familiar resemblance to the Cardinals’ theatrics; critics have seized on the puppet concept, for better or worse. But regardless of what the Cardinals themselves may be whispering in their backstage conversations, it wouldn’t look like a puppet show to a medieval audience – it is, rather, a very human series of moving tableaux, replicating devotional visual art, then bringing those images into purposefully imperfect life.

Historians tend to believe that the cycles, whose emphasis was always on visual vibrancy over narrative, had their start as moving tableaux, a procession (on wagons) of living art. Beyond those rare examples in which scripts have survived, we piece together biblical production history from incidental records – account books, inventory lists, legal documents – and these, frustratingly (at Skinners’ Well/Clerkenwell, and in smaller productions elsewhere), often don’t specify whether the biblical plays in question had any dialogue. We are quite sure that some were silent and some were not.

Stage directions in the surviving cycle scripts, meanwhile, show that speaking performers likely still made use of tableaux, which fit well with the presentational, non-naturalistic style of the performances – achieved with highly gestural and sometimes conspicuously athletic acting (closer to today’s drag performers, I’d say, than our Shakespeareans), accompanied by non-diegetic musical accompaniment, and punctuated by scrappy but spectacular special effects. A medieval audience saw this style as the rawest and truest way of representing emotion or human experience onstage. As a modern audience member increasingly bored by naturalistic or confessional theatre, but delighted by The Cardinals, I am inclined to agree.

The fact that the mechanisms behind special effects were likely quite visible did not at all detract from their effect. Those bustling, mobile, noisy crowds, in broad daylight, could easily see and hear everything around the open wagon performances (which often used the street as a secondary playing area). The Cardinals‘ revelation of “what is happening in the wings” is perhaps its most striking resemblance to medieval cycles, when wings (and proscenia) weren’t invented yet, nor was the distinctly modern reflex for “suspension of disbelief.”

As for what medieval audiences did believe – that is more complicated.

To paraphrase medievalist Sarah Beckwith, it was only when opponents of the Catholic Church began pointing out the “theatricality” of Catholic ritual as a sign of its profanity or falsehood, and then when Catholic defenders responded with accusations in similar terms, that early modern people started thinking about play performances as generally profane or false in the first place. Before that, urban medieval audiences-whether or not they believed the Bible was really true (and no, not all of them did believe) – could witness a sacred potential in plays. There was a capacity for fluid belief and real presence in play performance, which modern theatre – and, as Beckwith would have it, modern religion – can no longer really access, given a culture where belief is always already contentious or defensive:

“My claim is that the separation of theology and theater, of religious and theatrical history, has been disastrous not simply for the mutual understanding of those disciplines but for their own internal self-understanding. Perhaps more modestly and pertinently, it has been detrimental for our ability to receive, re-create, and understand the most communal drama in our history.”

For any living audience who is paying attention, The Cardinals plays provocatively with resonances between sacred belief and theatrical “suspension of disbelief.” For those of us who have been trying (and mostly failing) to commune with dead audiences, those resonances feel like an accidental reincarnation, a remembering. Perhaps in The Cardinals, for a student of the cycles, are traces of what performance could do before the profane restrictions of modernity – and a challenge to what it can still do, and to what present-day audiences might still see.The following are the primary works consulted in this post – (check them out to learn more about the medieval biblical cycles!): 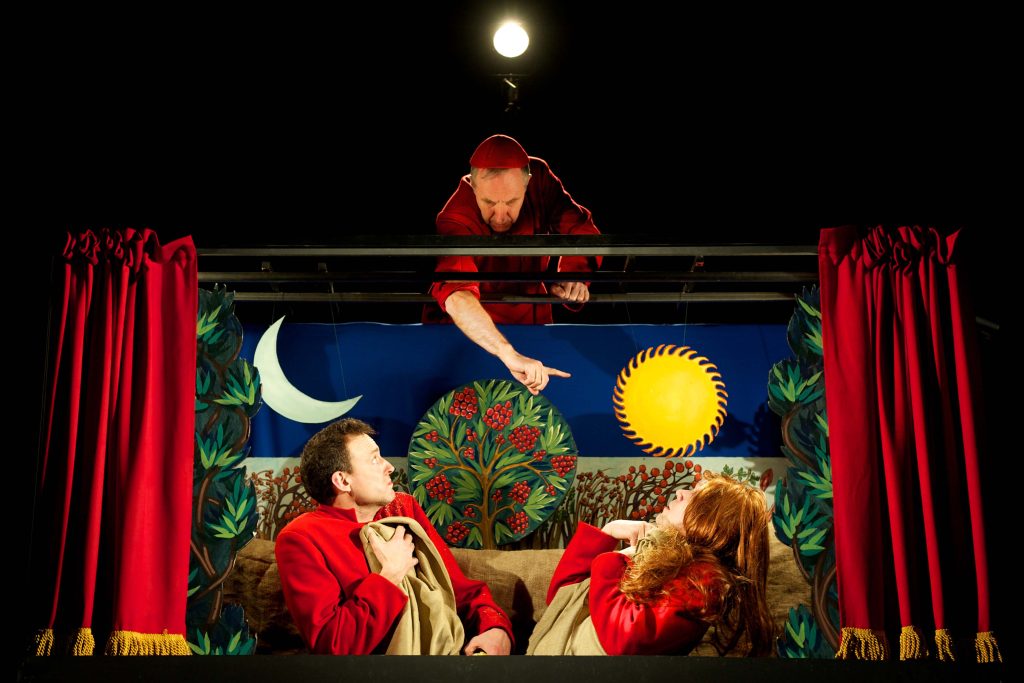