I am Hedi was a performance piece created as part of a national arts education project, Echo Eternal. This project pairs schools with artists who work together to create artistic responses inspired by the filmed testimonies of Holocaustsurvivors. The ‘echo’ created by each school and artist is filmed and will ultimately become part of the new HolocaustMemorial and education centre in London, due to be completed in 2021. This was our second project in this initiative – the first being Zigi Doesn’t Hate

We worked with students aged from 11 to 14 at Archbishop Ilsley School who had been gifted the moving testimony of Hedi Frankl. We turned Hedi’s words into a long poem. Below is the introduction to the show which niely sums up how we worked and how the students responded to the testimony.

“Among the many millions who were killed in the Holocaust, some did survive. We have been given the testimony of one of those survivors, Hedi Frankl. She spent 1944 imprisoned in a forced labour camp.
Hedi was aged just 16, the same age as many children in our school. We carefully watched Hedi’s interview. We heard about her terrible experiences and her survival. We were moved by what she said. We found it difficult to comprehend what had happened to her and millions of others.

We looked at photographs from the Holocaust.
We talked about how it could ever have happened.
We questioned how human beings could do such things to other human beings.
We asked why. We asked how.
We wondered if such a genocide could ever happen again. We discovered that it has and that it could.

Listening to Hedi we realised that we cannot put ourselves in her shoes. We cannot pretend to know or understand what she and others went through. But listening to the words of one human being among millions has made us think. It has made us understand that we must never forget. We must not take peace or kindness or humanity for granted.

Our response to Hedi’s testimony uses her words and our words, because words are powerful things – for good or ill. It matters who says them and it matters how they are heard.” 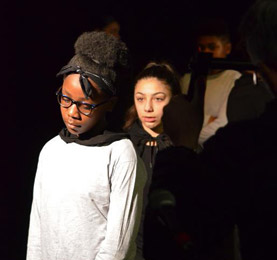