Zigi Doesn’t Hate was a performance piece created as part of a national arts education project, Echo Eternal. This project pairs schools with artists who work together to create artistic responses inspired by the filmed testimonies of Holocaust survivors. The ‘echo’ created by each school and artist is filmed and will ultimately become part of the new Holocaust Memorial and education centre in London, due to be completed in 2021

We worked with students aged from 11 to 14 at the Jewellery Quarter Academy who had been gifted the remarkable testimony of Zigi Shipper. We were lucky enough to meet Zigi when he came to Birmingham to be part of the launch of Echo Eternal. The childrenwere very excited and moved to be able to speak to him in person. With Zigi’s words echoing in our heads we spent time exploring the history of the Holocaust and considered how such terrible genocides might be prevented from happening in the future.

The students were inpsired by the final words in Zigi’s testimony, “Do not hate”, and our piece revolved around that phrase. We remembered that Zigi was just a child when he lived through such terrible experiences and we thought about all the other children who did not survive. We thought about all that lost potential, all those hopes and dreams that were never realised. So in our performance we highlighted the potential of our young people today. The students shared their aspirations with the audience, they talked about their different backgrounds,their varied likes and dislikes, their similarities and differences. They shared Zigi’s message that “we are all human” and they made a pledge – understanding that it is not alwayssufficient to simply ‘not hate’, that sometimes a stand has to be made.

Later in 2018 we completed a second residency as part of Echo Eternal with Archbishop Ilsley School. This culminated in a short performance piece entitled I am Hedi 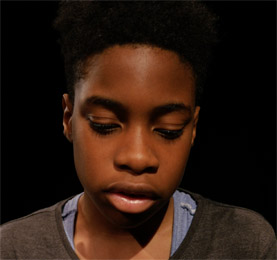