In 2003, for the umpteenth year running, I found myself frustrated at tales of extraordinary Christmas lights illuminating houses that I couldn’t find. The Christmas lights phenomenon had been growing and it seemed a guide was needed, directing people to the best in town. No one else appeared set to provide this service, so it sounded like a job for Stan’s Cafe.

The joy of being a theatre company with an extremely flexible take on what it means to be a theatre company is that you can pursue almost any idea you fancy. This project sounded like it needed a decent bit of technical input and strong street level engagement; we needed a partner. THE pUBLIC, a typographically contrary community arts organisation based in West Bromwich, had previously commissioned our Space Station project and had a track record in digital media, so pitching the idea to them made sense. Our timing was good; they had already been talking about the Christmas light phenomenon and were wondering what to do about it.

On one level HoHoHo is the documentation of other peoples art works, a photograph, a short review and the ubiquitous Star Rating. On another level it is itself a work of art. Inspired by Stephen Potters Lifemanship books we looked to invent a world of art criticism addressing Domestic Festive Illuminations. In common with other branches of criticism ours was to have its own lexicon, shorthand, back-story and shared aesthetic. HoHoHo is playful, but crucially it takes the illuminations and their creators seriously.

Households whose lights were reviewed for HoHoHo received a postcard, which thanked them for brightening up our lives. The card also introduced them to the site and invited them to visit. These cards were heartfelt and the response equally so. Those who replied seemed genuinely pleased to have been noticed, they told their friends, some asked us to review again when their full display was mounted. People recommended displays worthy of attention, others asked for theirs to be included. HoHoHo was busy with visitors and reviewers, on the day it hit local television the server wobbled under hits and nearly fell.

In the Stans Cafe office a large map of Birmingham (and lower Black Country quarters) was stuck to the wall, acupunctured with bead headed pins each denoting a fresh review. Pins became clustered on estates far from the art galleries, concert halls and theatres of the City Centre. At worst we were pointing people to gaudy decoration in the dark foggy nights of winter at best we were celebrating Electronic Folk Art.

Plans exist for more lavish versions of HoHoHo but time and finances have not allowed us to realise them. HoHoHo is lying low this year, maybe it will rise again next. This site now history, you must take to the streets without us. 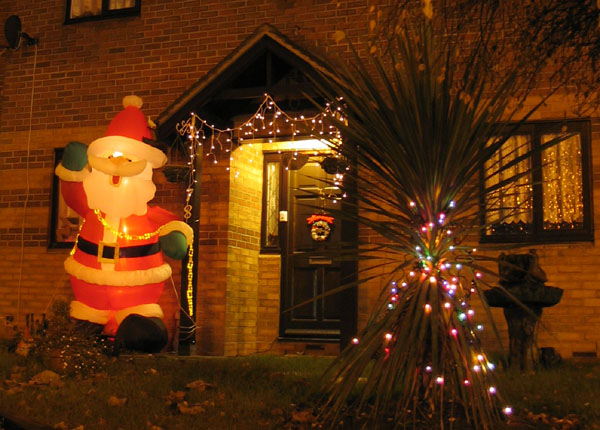