Almost everyone staging a new theatre production in the real world faces the same problem even before start rehearsals. Every production needs an image to promote it, but the deadline by which your host venue requires that promotional image is almost always long before any actors set foot in any rehearsal room; so what image are you going to use?

This problem is particularly acute when the play that needs promoting has yet to be written or devised, what do you use as your inspiration? You need to create an original arresting image, which will work well in a venue brochure plus your flier, poster and now website. Ideally this same image will also catch the eye of picture editors working for newspapers, magazines and listings publications both on and off-line. In addition to all this, you want that photo to lure in a potential audience without misrepresenting an unmade show.

In March we spent a morning with our excellent photographer colleague Graeme Braidwood taking shots to promote The Capital, our new show which opens in October. Facing this challenge again seems like good excuse to reflect a bit on the art that is really the marketing activity, of taking promotional photos for theatre shows. Don’t let anyone ever accuse this website of not being niche.

Back in ‘the olden days’ I used to take the promotional photographs for Stan’s Cafe, this was because I had a decent camera, Graeme (Rose) was going to be seen on stage and between us we had no budget. In an effort to turn our lack of theatrical location into an advantage we would usually go off to shoot on location somewhere, a strategy we still use occasionally. Ironically, given this strategy our first major success was this Magrite like shot of the back of Graeme’s head, which promoted our Erik Satie homage, Memoirs of an Amnesiac.

Most spectacularly, in 1993 we drove to the south coast for an amazing set of photos with the stunning white chalk backdrop of Beachy Head for our show Canute the King, the premise was simple Canute is pictured failing to turn the tide, the throne we made for the shoot became the throne we used in the show – Graeme got freezing cold but the results were great. Ironically (again), the most used shot didn’t feature the spectacular cliffs at all and this shot got on both the flier and coveted front cover slot of a festival brochure.

Next Graeme and our mate Pete carried a bingo machine round the corner onto a derelict section of Brighton Road where they donned cereal box VR goggles to promote Bingo in the House of Babel. The bingo machine and goggles appeared in the show but neither Graeme nor Pete did. This image formed the basis of our poster but wasn’t picked up much at all, probably because its content is almost entirely inexplicable.

Voodoo City was the first shoot we felt able to devote any kind of budget to and so it became the first of three shoots we did with photographer Mark Taylor (aka ‘The Bloke from Stoke’ (who we later found out lived in Crew not Stoke)). Our approach at this point was to just try and look cool in an urban concrete environment hoping that might draw a crowd. Momentarily Stan’s Cafe looked like it might be a low rent indie band. I still love many of the images from this shoot but I don’t think the helped sell tickets.

For Ocean of Storms Sarah Archdeacon, Mark and I drove to Droitwich Transmitting Station one very cold night. Here Mark used a flash blur technique while Sarah played around with a battery operated inspection light. The results are beautiful and Sarah got so cold she swears to this day one of her moles fell off – this seems a medically implausible claim but it was a cold night and the photos were much admired.

Finally we handed Mark a ‘hospital pass’. Simple Maths was conceived as an incredibly minimal, just performers sitting on chairs in different relations to each other, no drama, no plot, no characters, almost nothing at all. There seemed to be nothing for it but to set up a version of the show might be and photograph it. We recruited two local actors to sit in for Amanda and Craig, I pretended to be Jake, Sarah and Nick did passable impersonations of themselves and Mark clicked away. I quite like this shot that was used for a postcard promoting tour dates…

… and Simon Ford did a remarkable post production job of transforming an uninspiring photo into something that contains the spirit and concept of the show.

I think maybe Simple Maths broke something between us and Mark so we recruited Ed Dimsdale to take up the promotional photograph challenge. Ed had been collaborating with the Bristol based theatre company Bodies in Flight and so was familiar with the challenge.

Good and True was to be set in a police interrogation room so we set up this scenario and Ed arrived with his latest obsession, a pin-hole camera, so Sarah, Nick and I spent a long time sitting very still or rocking smoothly backwards and forwards, while a series of incredibly long exposures were taken in our faux police interrogation room. One shot from this session, Sarah’s face partially obscured by a light bulb, got picked up by editors and was used all over the place. Ironically (yet again) this was one of the few images that Ed took using a normal camera whilst the pin-hole camera was slowly doing its thing. Sometimes it’s difficult to predict what is going to catch the picture editor’s eye.

We’d always been advised to have a human face in our promotional images, the logic being that people empathise with other people and so want to find out about them by attending theatre shows. I’m not sure if a crazed Simon Webb in camouflage make-up and crown (borrowed from The Playhouse) was quite what these theorists had in mind but it seemed apt for Lurid and Insane even though Simon didn’t play the president, who anyway didn’t wear make up.

Occasionally an early rehearsal period or a re-tour allows a production photo to be used as a promotional photo – but although this feels more ‘authentic’, showing the audience what they are going to get, I’m not sure it draws any more of them to the show. My favourite promotional photograph I think remains of Ed’s daughter Constance in a car breakers yard shot for Home of the Wriggler and used at the top of this page.

It’s rarely that we get to do a direct comparison between someone else’s production photographs and our own, but this season (Spring/Summer 2018) a show is coming to The REP partially based on The Anatomy of Melancholy which we adapted in 2013. As the book was written 400 years ago by the librarian of Christchurch College Oxford and warns against, amongst other things, the over consumption of comfort foods and alcohol we decided to do a shoot in the Central Library with Craig in one of our stock ‘400 years ago’ costumes, looking fed up surrounded by the detritus of comfort food, beer and pills. Our Catalonian rival chose an image of a naked woman, emaciated, sitting on a bed in a hotel room, each to their own.

For The Capital Graeme Braidwood came to our rehearsal space. Our plan was to do a version of our shoot for A Translation of Shadows in which a figure was cut out of a photograph and dropped in front of another image.

Once Craig started working for us full time he became the model for most of our promotional photographs as he shares the triple advantages of being available, being on our pay-roll and being in the shows. For The Capital however it felt important to remind people that we do have women in our shows, so we called up Amy, who had been part of a development week for the show.

Our objective was to get an image that would suggest someone struggling to juggle work and life in a big city. We chose a business skirt suit light enough to stand out on a dark background. We loaded Amy up with a handbag, laptop bag and – to give domestic balance – an awkward plastic bag of food shopping. With a phone in hand we were all set for action.

We wanted the photograph to convey a sense of movement that would suggest the twin moving walkways that the show is to be performed on. We asked Amy to run on the spot while Graeme revived Mark’s flash – blur technique.

Photo shoots tend to follow a similar pattern. Initial shots were a bit uninspiring but we know to stick with the idea and tweak the approach bit by bit to make things better. We changed the handbag to a shiny one, added a take-out coffee cup to Amy’s left hand, added in and umbrella, changed Amy into trainers and put her high heels poking out of the handbag bag. Tweaks were made to lighting and camera angles. Graeme crouched lower to give Amy the appearance of greater strength and give the image a more dynamic feel. Amy tried a few different facial expression – looking more determined and less harassed.

Digital photography’s ability to allow shots to be instantly reviewed is a huge advance and we spend lots of time huddled round Graeme’s camera trying to offer constructive thoughts without driving him mad. Once we are satisfied that we ‘must have something’ in the initial set up we then try an alternative approach, no matter how daft this feels after a successful first set up it is always important to explore another option, possibly because we will like it more and possibly because someone somewhere will take a strong dislike to our initial approach.

After the flash and blur of Amy in motion looking over her shoulder we decided to spend some time on heroic portraits, we ended up liking these as well.

The next step is for Graeme to select and share a long list of the most promising images. We go through his gallery of proofs and share a shortlist of these images. Our final choice is the shot that Graeme was excited about as soon as he took it. Amy’s blue plastic bag broke mid-shoot and had to be replaced, the shot taken as the bag was in the process of breaking was the one.

Once this decision was made the image was sent over to Toronto for Simon to “just drop something behind the photo for The REP brochure”. You can read Simon’s account of what happened next in his essay – Running but standing still.

You can book tickets for The Capital at The REP, Birmingham are now on sale here.

PS: One of my favourite sections of the David Bowie Is… exhibition at the V&A was the contact sheets containing the famous album cover shot along with a load of other images that weren’t but could have been. 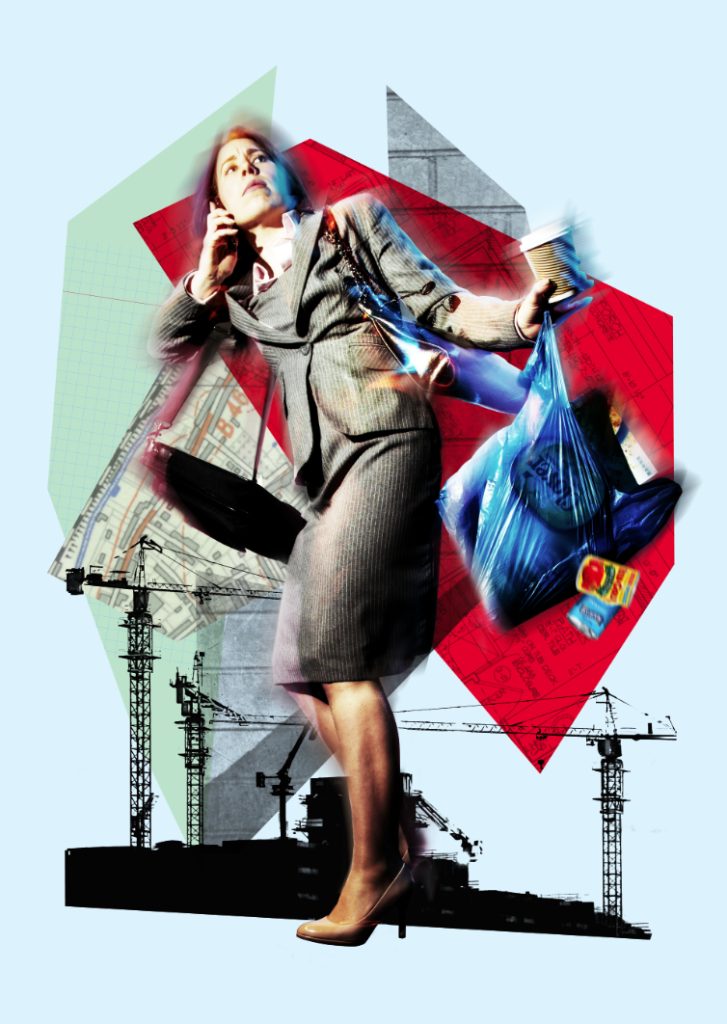