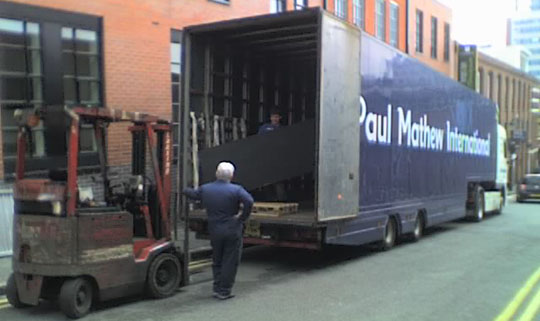 Today was planned as a day off, then it became the day that The Cleansing Of Constance Brown set arrived back from Cologne, then it also became the day that The Sunday Independent wanted to do a photo shoot for It’s Your Film, which observant followers of the diary portion of this page will have noted is BACK for the first time in almost five years.

Part of the reason today was supposed to be a day-off is that it is also half-term. So another day of ‘work experience’ for Eve (please keep it quiet that we do work experience for five year olds). Plans to put her off a life on the stage and pushing her towards medicine are going rather awry as she had a great time, zooming her truck around the storage space, riding on trolleys, playing with a bingo machine and studying how to operate a fork lift truck.

Later, with the newspaper photographer desperate to get a better gender balance in the photo-shoot, Eve took to modeling as an audience member for It’s Your Film, possibly with the consequence people will think it’s a kids show. This said, the liberties we took with the show to make the photographs tell the story required in the photogenic way required, are far more radical than suggesting it’s a kids show. We’ll see how it looks on 14th June.

Hopefully Eve will have something fairly spectacular for ‘show and tell’ at school on 15th June.