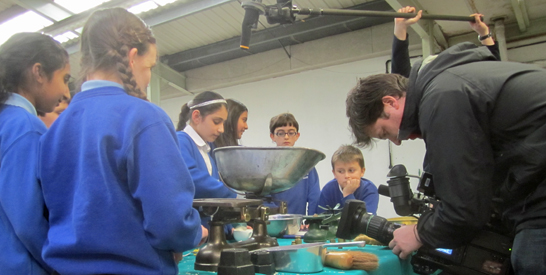 Tune in to BBC1 at 4.30 tomorrow Tuesday 22nd March to see Stan’s Cafe on Blue Peter. A film crew came to @ A E Harris on Thursday to make a piece about the census using Of All The People In All The World as its basis. We recruited a team of excellent Year 6 students from Chad Vale School to help us. The BBC feature will be on the BBC iPlayer for a week and Mr. Sansom’s will be on Chad Vale TV considerably longer.

It will be interesting to see how much publicity accrues to Stan’s Cafe from the feature. I offered a banner we use to promote the show as a potential backdrop to my interview show, this was politely batted away with a reference to the BBC’s guidelines on advertising – fair enough. The following night watching the latter stages of the BBC’s coverage of Red Nose day I went and made a cup of tea whilst there ran a vast advertisement for a brand of crisps – fair enough?

A member of the Stan’s Cafe team has explored the guidelines on Blue Peter badges and still holds out hope they will receive one in the post: “Blue Peter badges are only awarded to Children aged 6 – 15 or adults who have appeared on the programme”.