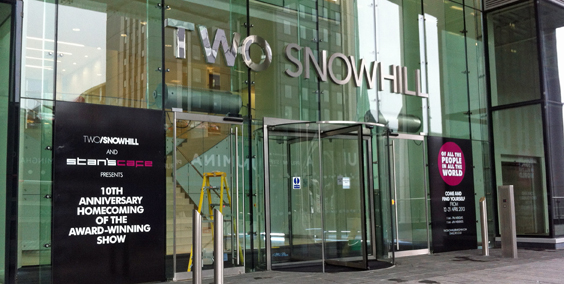 Last night was perhaps the first time that our opening night anxiety has been more focused on whether the venue would be finished than whether the show would be finished. Two Snowhill is a huge new office development, the biggest to open outside London this year, so there is little surprise there have remained many snags to iron out. We probably haven’t helped the snagging process as increasing numbers of builders have been popping in with their mates to visit the show as it has been prepared.

The building, which runs along the east side of Snowhill Station, has been jointly developed by Hines and Ballymore and they commissioned us to make their official opening a memorable event. I think we delivered the show looks fantastic because the floor is sliver, the low ceiling white, the walls are almost all glass with spectacular views over north Birmingham. The building’s atrium is fantastic, the rice has its lovely glowing golden colour and the paper it stands on is all white, we were in our brown housecoats and thoughtfully most of the guests had arranged in advance to wear dark suits – the kind of coordination that Prince in his pomp would have been proud of.

These events are often quite stressful as mixing people who have come not to see the art with free booze can lead to rice casualties but we escaped quite lightly, with only a few people inadvertently walking into statistics.

As the evening wore on we got more and more positive feedback and the suggestion there could be more ‘corporate gigs’ on the horizon. HOWEVER the key inspiration of this current gig is that it is not wholly corporate. Hines and Barrymore are opening Two Snowhill up to the public until 21st April so people can take in the show, the building and the spectacular views. There has been a lot of coverage. Birmingham Post have done a big preview piece, Created in Birmingham have kindly given it a plug and Adrian Goldberg, who is a great supporter of Stan’s Cafe had me on his Radio WM show yesterday to talk about the piece. He saw it back in 2008 and is a big fan “I can’t tell you how much fun the show is … you’d be mad, mad, mad not to go!”.

If you want to be on Telly, come to the show THIS EVENING at 18:30 as we will be LIVE on BBC Midlands Today.

One thought on “If You Want To Be On Telly”