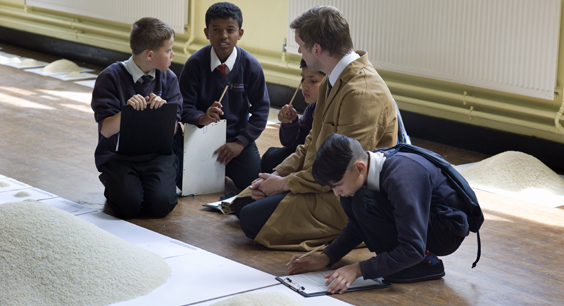 We are nearly at the end of another academic year, the perfect juncture to deliver a brief report on Stan’s Cafe’s Creative Learning activities, activities that rarely reach the public realm.

This has been our third year collaborating with Billesley Primary School and the benefits of this extended relationship can be seen in the range and depth of work we have done with the school.

Last week 90 Year 1 performed a fantastic dance piece for parents and the rest of the school. This had props, costumes and a soundtrack with words, all focused on how our bodies work and how they are similar and different to the bodies of animals.

Last term Year 2 filmed advertisements for living in off-world colonies. For this they wrote and performed scripts as well as making model space stations.

We worked with Year 3 on an enterprise project around the summer fair that included Queen Elizabeth 1 and the Parent Teachers Association.

Year 4 presented their inventions to an Ancient Chinese Emperor having spent a week immersing themselves in that historic culture (and making paper).

Year 5 have just performed a brief play they wrote about the forthcoming summer holidays. What made this piece extra special was that it was performed on a stage they had commissioned from a local architect.

Our partnership with Washwood Heath Academy is in its second year and starting to establish itself more firmly. For English we helped with a little production of The Monkey’s Paw. For History we helped some students with revision cartoons. For Geography we have just done a mini-Of All the People In All the World focusing on migration. For a cross-curricula project we made a small installation about the Holocaust. For science we helped out with a forensic investigation day. I also did a couple of training sessions to help spark ideas and creative thinking.

This year we welcomed Victoria Park Academy as a partner school and launched this relationship with an extended Coding / Creative writing project with Year 5. Earlier in the year we ran A City Adventure training day for their sister school in Stafford Rowley Park Academy, where we also helped create a huge carnival event.

Saltley Academy also joined our network. Here we led a maths probability project and helped relaunch their house system. This school also commissioned our most high profile creative learning event of the year St. George’s Steps which was featured on local television and drew various VIPs as admirers including Her Majesty’s Chief Inspector of Schools, Sir Michael Wilshaw.

All this work has only been possible thanks to a fantastic team of Associate Artists who have all committed to their various projects full throttle and our Creative Learning Manager, Andrew Fox who has been prodding and pulling and cajoling everyone along.

A most exciting development has been that the Head Teachers of all our partner schools have chosen to share their thoughts and experiences at a series of breakfast meetings. This is becoming a true network of schools convinced by the power of the arts to enrich lives and facilitate learning.

Next year the network will grow slightly with the addition of Brownmead and Tiverton Primary Schools and meetings have already started with most schools planning for a whole new set of exciting original projects for 2015/16. Watch this space…