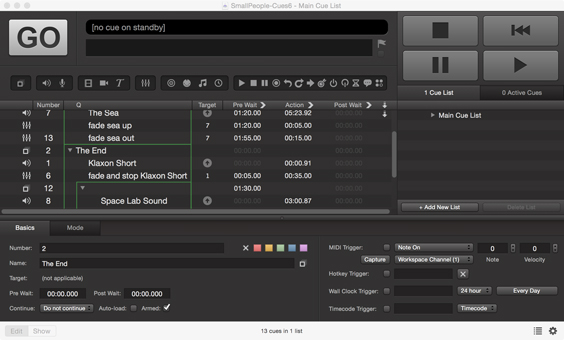 So many things are possible now! In our earliest shows I directed and ran the lights and sound. The lighting was fun, choose which of twelve channels of light to have up at what level on the A Fader, then prep the next cue on the B Fader and when the moment came pull paired sliders down to cross-fade between the two, then reset the A Fader for Cue Number 3. To the side for the lighting desk two cassette players would sit one on top of the other with blobs of white insulation tape marking the play and stop buttons.

I enjoyed operating the shows and hated it. I was brilliant at it and terrible at it. It allowed me to feel I was on stage with the actors but I was supposed to be the director. I was brilliant because when I remembered to do the cues I did them with total artistic sympathy for the action and perfect timing, but I was terrible because I often didn’t remember, having been sucked into watching as a director not an operator.

To be honest it was a relief when we recruited Arvo to take care of operations and simultaneously Jon Ward enabled us to be early adopters of CD technology. Now A Translation of Shadows runs off a laptop. The computer splits, fades, plays and resizes the video, it runs lighting cues from the video’s time-code via a midi link to the venue’s desk, synchronises lighting and audio cues to the operator’s press of the space-bar and drops effects over the live microphone feed it processes.
So many tremendously complicated effects are possible now. Watching the beautifully slick and atmospheric Weaklings by the Chris Goode & Company the other week I found myself reflecting that the level of polish they had with video, lights and sound would previously have felt the exclusive preserve of a company with the resources of The Wooster Group or Robert Lepage.

Having been introduced to this technology in A Translation of Shadows Nina was keen to make use of it when reviving The Cleansing of Constance Brown. She asked if I had any problems with this. I said “no, of course not…” so she starts programming, “of course philosophically I don’t really approve of pre-set fade rates”.

Actors modulate their performances according to the unique circumstances of every performance, so there seems something wrong with the lights (and now sound) having a pre-determined and inflexible fade time. For one performance a 5 second fade may be perfect, but who is to say that the next evening 5.2 seconds may not be better? This caveat put Nina off her stride for a bit, but ultimately she came think Yarker’s welcome to his theorising but out in the real world no one will notice the difference. I don’t mind, back at home we have a 24 channel manual desk for the likes of me and we run The Cardinals from a single preset six channel lighting board and a portable twin cassette deck. Different shows need different solution but ultimately it seems almost anything is possible.