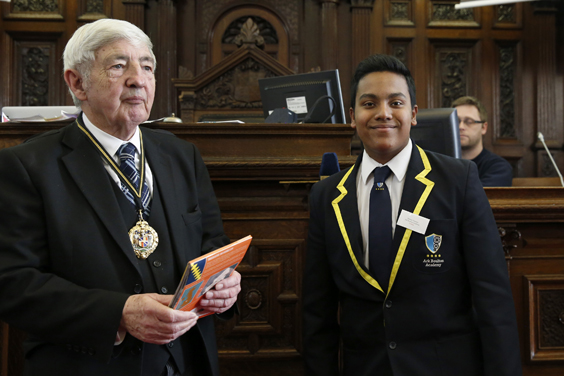 So everything that I said in yesterday’s post would happen has happened. The council house was overrun by teenagers. They all looked very smart in their school uniforms and those whose schools didn’t have uniforms still looked smart. It was a fantastic mix of young people from across the city and although, predictably, things were a little tentative initially people soon started warming up.

We had invited a number of local politicians, public sector workers and activists to the event in order stop this area of life feeling so distant from the Trailblazer‘s lives and it was gratifying how many of these people made time to come and then to join in with the activities.

Lunch seemed to be fairly well received – which was one of my major worries – and, regulated by the Birmingham made ACME Thunderer we kept to time and entered the council chamber at 13:00

The presentations were great. There was a lot of talent on display and enough confident young people for the adults to have do very little. The voting was close. The technology ran smoothly. The speeches for Mayoral office were all impressive. We had given the speech writers quotes from earlier historical speeches to appropriate and re-purpose. The results were genuinely moving and a new Executive Mayor for 2030 was elected.

The current Lord Mayor received his copy of the map graciously. A late draft of the Prezi was shown and everyone left about ten minutes early with their maps and certificates.

We tidied up, went for a small celebratory sit down and I started to relax for the first time since October.