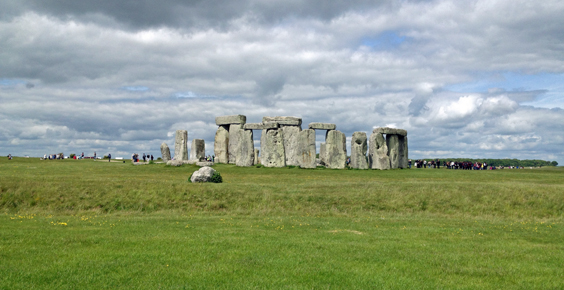 While noble volunteers were generously donating their labour scrubbing 4000 years of dirt from @AE Harris I was fulfilling the duty of anyone called James by driving a car full of American visitors around the English countryside. Fortunately our travels took us to Stonehenge and through Avebury which allowed my guilty conscience to excuse my absence from cleaning duties – suddenly I was on a research trip.

Stonehenge has been transformed by its new visitor centre, the rocks remain the same but their place within a landscape of barrows and other prehistoric architecture is suddenly made clear in a way it never was before. Not having a road pass 5m from the monument has helped the vibe of the site and that vibe will crank right up if the nearby A303 ever does get put in a tunnel.

For our 48 hour performance The Camp we aren’t pretending to be from pre-history but it does involve living in an Iron Age fort so hanging out at Stonehenge and cruising through Avebury was another welcome opportunity to mull over the unknowable nature of the deep past.

On a more practical level, this morning we had a production meeting with Densie and Kay who are collaborating on costumes and Yinka who is lashing together ideas for a structure. We spent a bit of time in the meeting treading water, talking around possibilities not making much progress, more time passed and were in danger of merely kicking all our problems down the road in the vain hope that when we next meet up with them they will have solved themselves. Then the breakthrough came and as is often the case it came in the recognition that we needed to change how we were working on the project. Rather than refining designs on paper and screen we needed to gather materials together and improvise, working things out by eye and intuition in the physical world. This approach applied across to costume and structure with shared materials being used where possible should help give the piece an aesthetic coherence. Time will tell.