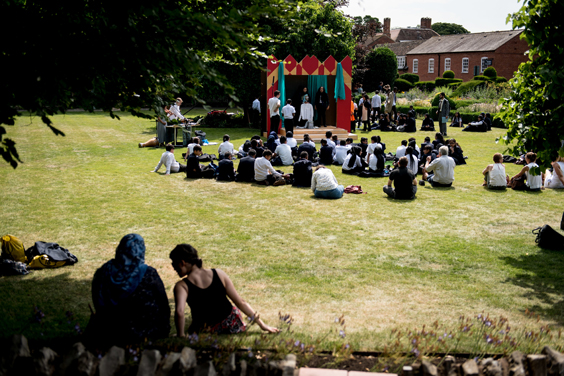 The course of true love never did run smooth and neither did doing a Shakespeare play with 240 twelve and thirteen year olds, however last week was a lot less tempestuous than it could have been.

As we were planning to perform outside we lived in fear of rain, but the rain never truly came. The sun came but judicious application of cream meant no one got burned. The slot together stage slotted together on time at New Place with only token resistance. A replacement for the 16amp – 13amp adapter which was left in Birmingham on Thursday and which was neither stocked by Maplins nor Halfords was located at Blacks just round the corner. The school’s coaches were only predictably late. The rump of students who had previously resisted learning their lines was markedly reduced. The application of a TV style boom microphone semi-solved audibility problems with the quietest students. Most people arrived on stage mostly on time. Many people forgot where to come on from and many could barely be prised off the back wall but some remembered some gestures and a few added a few puppet gestures. Ultimately the thing was that they were almost all there and those that were there all did it, they performed A Midsummer Night’s Dream on the site of Shakespeare’s House using Shakespeare’s words. They worked as a team. They stood on stage and acted in public and they seemed to have fun and they seemed proud as they had every right to be.

A Midsummer Night’s Dream follows on from last year’s production of The Tempest and with Saltley Academy we are already committed to another production next year. The value of our long term collaborations with schools is that we can learn our lessons and then have the opportunity to apply this learning. It takes time but then “how poor are they that have not patience” – who knows what next year’s production may be…