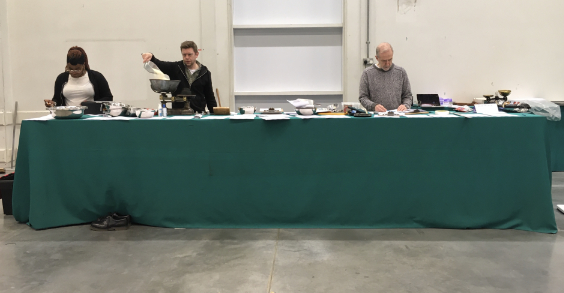 Sometimes opportunities crop up at the last minute and have to be grabbed. In the midst of the whirl of spinning cranes that is the white hot redevelopment area of Nine Elms, just up stream from Vauxhall Bridge, sits an enormous single story warehouse with beautiful polished concrete floor. After years of being used for film shoots and fashion shows, as a rehearsal space for opening ceremonies and a car park for NATO leader limousines this former Post Office delivery centre is due for demolition. But before it goes Wandsworth Council have leapt in. Prompted by his enterprising arts team, the council leader asked where the local community benefit was from these high roller events and in response the doors have been opened for a free public event.

The Mail Centre Takover promises to be a fantastically balanced event. One one side of the warehouse The Actual Reality Arcade is being installed by artist Matthew Harrison and his team. This takes old style arcade games, such as Tetris, Pacman and Space Invaders and re-imagines them as if in a School Summer Fayre – as gloriously analogue as can be. On the other side of the room we’re counting out 6.7 tons of rice to represent a vast array of human population statistics.

With 6.7 tons we have one grain of rice for everyone in the UK and USA combined. As this venue is in the shadow of the new US Embassy and 2020 sees the 400th anniversary of the Mayflower sailing across the Atlantic, we thought US / UK would be a interesting theme to mix in with statistics representing life in Wandwsorth and London, current affairs and historical links. We have a team of six setting up the show and four will run the show from Wednesday 15 January – Sunday 26 January (but not on Monday 20 or Tuesday 21).

We are very much looking forward to seeing how audiences move between the two installations. It should be a great fortnight in a formerly inaccessible corner of the capital. It would be wonderful if you and your family and friends could join us.