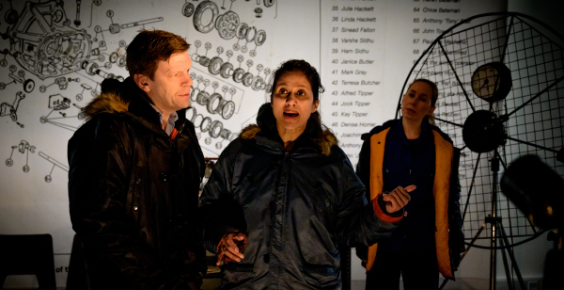 It’s ten years since we last performed Home Of The Wriggler. One of the original cast now lives in Los Angeles, another is acting for the RSC and another has just delivered her latest book to the publisher’s deadline. We have three new faces in the team, except Amy Ann Haigh stepped in for one of those three in the very last performances in Beijing and Hema Mangoo was part of the team that make our last show, The Capital. It’s only Carys Jones who is new new. Craig Stephens of course is our constant, the only person to perform in this show every time its ever been staged.

in 1999 we restaged Impact Theatre’s seminal show, The Carrier Frequency. The process took two weeks. In the first week everyone copied performances directly off a video recording we had of the original show. Then, in the second week, they tried to forget that video and those performers that came before and make the performances their own.

Our process here is a little different, partly because so much of the show springs form script not images. We did watch a recording of the original cast performing Home Of The Wriggler just to steal things we like on the understanding we could ignore things we didn’t like so much. I spent the first week reminding myself this cast isn’t doing it ‘wrongly’ they’re just doing it ‘differently’. Now, this week, I’ve forgotten the original team (no offence intended) this is now just the team.

It’s tricky taking a video as a definitive documentation of a show – as we found when bringing The Capital back to life after just a few months break. The performance you video is taken as definitive but it may be ‘a-typical’, it may contain mistakes or anomalies. In our case it is usually logistically much easier to shoot the dress rehearsal or at the first venue – but this is before the show has had a chance to mature.

The performance of Home Of The Wriggler we watched on video was eighty minutes long and today’s run was just seventy one minutes and it feels much better for being that much more pacy. I can’t wait to share this new interpretation of this popular old show with audiences both old and new.