For the last week we have been sharing our devising space with a team of builders. They have generally kept themselves to themselves and have politely resisted the urge to heckle our less successful improvisations. Instead they have chosen to mock our mid-process vacillation by cracking on with a piece of their own time based art. In what appears to be a homage to Station House Opera they have taken a large pile of breezeblocks and built a wall to seal us into one side of the workshop space. Inept project management on the part of our landlords means we still can’t close our own roller shutter doors from the outside. The builders are good sorts though and have been persuaded not to brick us in entirely, they have left us an escape route. 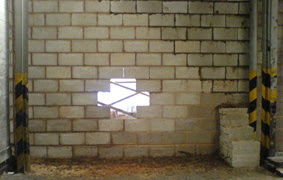 Next week starts with Nina coming in to see what we have been working on so she can start proper work on the soundtrack. We are currently in that strange phase where we have been developing material using existing music long enough to start thinking of it as the show’s official soundtrack. This music is influencing the tone and pacing of scenes but beyond that it will leave no trace on the show.

Who Says A Funk Band Can’t Play Rock: Funkadelic
This seems to have taken over from One Nation Under A Groove.

I Got Rhythm: Lester Young
Spot on for a change of tone.

Overture To Orpheus: Louis Andriessen as played by The California Ear Unit
Seems to work with two quite different scenes.

Echo Deck: Primal Scream
Though not so much now we actually know what we’re doing.

Mozart’s Requiem
Unfortunately once this is playing anything looks fantastic, it knocks your quality control out of whack.

Kaddish: Towering Inferno
In particular The Bell and the title track.