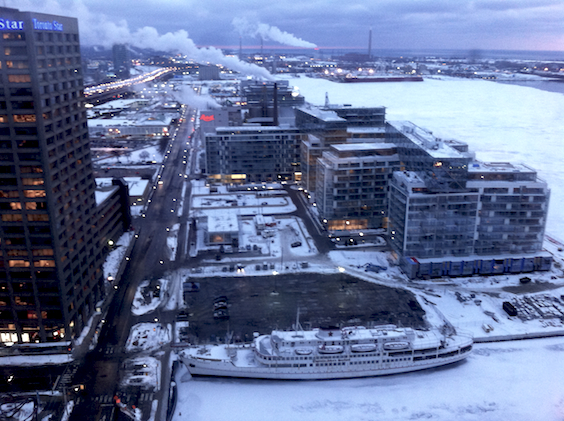 So on Friday night I saw The Cardinals for what may prove to be the last time. I’m back at Heathrow now, don’t do the Australian leg of the tour and there are currently no performances booked beyond that.

Obviously I would love the show to continue on for many more years, but if does have to end here then so be it, I would be content that the piece had a decent run and grew to be a strong work of art. Our experience in Toronto has confirmed this for me.

Here the show was received with great seriousness, a context set up by careful and cleaver communication about the show from the venue’s marketing department and Director of Performing Arts, Tina Rasmussen who wrote a great introduction to the show in he program notes.

Watching the show in these last two performances I suddenly realised that we have finally managed to heal over the graft that filled the gap where the interval used to be. This sequence now feels like a key, well calibrated section of the show, rather than a piece of scar tissue built as a fix for a problem. I was also delighted to spot that the level of detail in performance has reached a whole new level. Now the rhythms and timings of the performances are modulated to line up visual action with events in the soundtrack throughout the show, it is all very impressive.

On Thursday there was a pre-show talk led by Matthew Sergi and on Friday a post show question and answer session led by Frank O’Connell. Both events taught me to think about the show in new ways.

Dr. Sergi is Assistant Professor in English at the University of Toronto, he specialises in Early English Drama and Medieval Studies and gave a fantastic talk about the passion plays, particularly in Chester in the fifteenth and sixteenth centuries. He used this context to reflect on what it means for us to be staging Bible Stories in the Harbourfront Centre in the twenty first century. He probed the audience to respond to why it may feel like a ‘risky’ thing to be doing, where is the ‘risk’? We also talked about the relationship between theatre and religion a bit. It was a fantastic presentation which I found emotionally powerful.

The post-show discussion resulted in me talking about my Grandfather (who was a vicar), which was also quite emotional. As usual it was interesting listening to others in the company and people in the audience reflect on the show. At the close I ended up improvising a theory about the Cardinals and some how breaking some new ground.

We had always been clear in rehearsals that we didn’t want the Cardinals to be total idiots – that would have been too easy. To this end, though there have mishaps and their performance style is naive, we work hard at making their material effective. At the very close we stage things to give power to the Cardinals. The end is visually shocking and in a way brutal. Craig and Gerard’s Cardinals are in control and stand high above the set confronting us from a position we have hitherto always imagined the Cardinals thought was out of our view. In doing this we hope, in the dying seconds of the show, to introduce the idea that maybe the whole thing has been an elaborate bluff, maybe these men have been much more knowing and controlling that we had previously given them credit for. Maybe they have not be acting for the small frame within the frame after all, maybe theirs is the larger frame, the whole stage, the whole world.

I like this reading and I like performances in which my own thinking about the show is tested or extended.

One thought on “The Mystery”