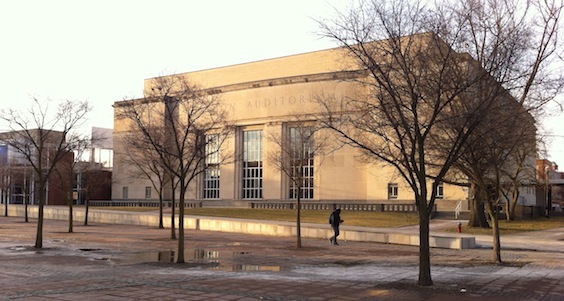 It was great to catch up with The Cardinals in Columbus Ohio. The show was at the Wexner Arts Center, which is on the Ohio State University Campus. The theatre is a vast place, so big that for shows like ours, the curtains are closed and a seating bank is built on the stage. It was intriguing to see the shifts the show has made in my absence and through multiple performances.

Some changes are clearly the small adjustments that come with performers thinking about moments in a slightly different way, or having a little more time to consider them as the show becomes ever more familiar. Some feel like incremental changes of emphasis each building on a previous adjustment. By and large I liked what has been happening to the show, it is more assured and detailed than it was the last time I saw it.

The one significant change is a costuming one. At a post show discussion it was revealed that some audience members read Graeme’s suicide bombing moment as stemming, not from a raging Palestinian sense of impotence and injustice in the face of the tight restrictions preventing him exit from the West Bank, but the pique of someone refused entry into a gay nightclub. So Craig’s camouflaged cap was replaced by a full on military helmet and his vest and pumped up physique are now shrouded in a combat jacket. The show must have seemed pretty surreal to those people thus confused, hopefully we have removed any ambiguity in that direction.

The other thing that reads differently in the US is the name of the show. Over there a Cardinal is a bird and that bird lends its name to all sorts of organisations including an NFL Team (Arizona) and the private hire firm whose care drove me to the airport this morning.

Controlling audience laughter in the show feels like a key challenge. Early on we clearly give people permission to laugh, but later we have to try and rein this in, in order to establish the possibility for other levels to the show. For me the first key moment in this regard is when Gerard pours rice over the heads of Graeme and Craig dressed as Adam and Eve. It sounds comic, it is ‘weird’, but we’re keen for it not to be funny. We’d prefer ‘weird’ and ‘mysterious’ to funny. Those familiar with Of All the People In All the World will know we have a track record of using rice to represent people. One of our guiding influences in making the show was the Georgian Film maker Sergei Parajanov so when we asked ourselves “how would Sergi represent God blessing people with many descendants” the answer was clearly “by pouring rice over their heads”. How to help this not to be funny? For Graeme and Craig not to react to it at all and not to give any expression that could be read as them reacting to it. We tried this tweak out it seemed to work, but maybe only because that night’s audience was less inclined to laughter anyway.

On Friday we did a bit of work before the show, rearranging a little bit of blocking around The Resurrection, just to smooth out and clarify things with Rochi in that moment, one of those areas of the show that has had the most attention over the years (yes years) we have been reviving and revising this show. I suspect we could play it endlessly and continue to tweak it; not least as occasionally I’m told the notes I give one day contradict those I have given a few weeks before. Ah well, it keeps folk on their toes.