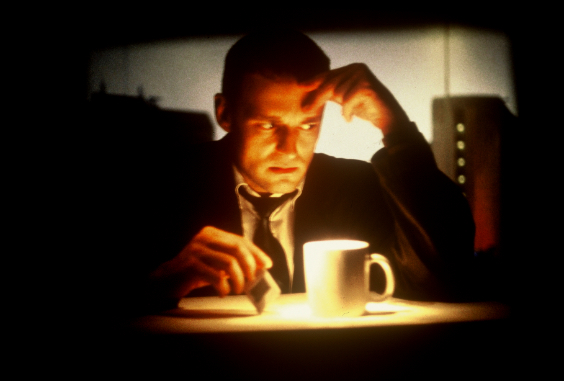 Back in 1998 Stan’s Cafe was in big trouble. We’d made a show, Simple Maths, so wondrously minimal that the unobservant believed it was a drama in which nothing happens. The fall out of this was that plans for our next show, A Translation Of Shadows, had to be put back sixteen years and we had no money. The only theatre work on our horizon was a £400 commission from The Bond, an artist run gallery in Birmingham, to make a one-off performance for their regular Friday night performance art slot.

Freed of all conventional theatrical restrictions and with a devil may care ‘it’s just one night’ attitude, four of us spent four days making a four (and a half) minute long show called It’s Your Film. We were playing around with a Victorian theatre trick called Pepper’s Ghost which allows the illusion of actors vanishing into thin air. The concept was to use this trick to make something that looks like a film but is performed live. We figured this would be most easily done by having an audience of just one person watch from a viewing booth through a small rectangular window, so that’s what we set up in the gallery.

On the evening of 5th June a big crowd had gathered to drink free wine and see our show. Unfortunately for them it was ‘first come, first served’ both for wine and theatre. Numbered tickets were given out and every five minutes, one by one, someone was called to sit in the booth.

We performed the show 37 times that night before our producer Paulette threw in the towel. The response confounded us, people seemed to really like it – a lot. They buzzed at the personal quality of seeing a show performed just for them. They were bamboozled by the trickery and loved our playful twisty turny ending. The show was a hit, but what do you do with a 270 second long show that needs a team of four to stage and can only be seen by one person at a time?

The holder of ticket number 39 was from the Arts Council and in a very polite and apologetic manner when they knew they were about to miss out they attempted to queue jump. We held firm and a few weeks later called them up in their office offering to re-create the show for them but with a new ticket price of £2,000.

So we were off and running. Ikon Gallery, newly installed in Brindley Place, hosted the next batch of performances, to which we invited promoters and got bookings at MAC and our first ever gig at Warwick Arts Centre. Paulette got us into Manchester’s X-Trax festival on an ‘expenses only’ agreement and to those performances came a host of international promoters. An invitation to the British Council Showcase in Edinburgh followed and this led to more international bookings.

This miniature ‘one-off’ show got us out of trouble and into a whole lot of fun. For seven years we rode the It’s Your Film wave, performing the show thousands of times in dozens of countries, until eventually things started to slow down. In a sector which fetishises the new, this show had been around for a long time and the individual performance experience, so novel in 1998 had become common enough by 2010 for It’s Your Film to be invited to the world’s first festival of one-on-one theatre where it was referred to as the Godfather of the format.

It’s Your Film gave us so many amazing touring experiences, introduced us to so many friends and won us so many new commissions that it is impossible not to look back on it with great deal of fondness… which is why we are so delighted to be able to announce that it is back!

Returning to Birmingham for the first time in twenty years It’s Your Film will be staged at The Landsdowne, 25 Hagley Road to celebrate the opening of the block’s 206 stylish new apartments. Tickets are FREE thanks to sponsorship from The Landsdowne’s management company Way of Life. Bookings can be made “>via Eventbrite so once again, as in 1998, it’s ‘first come first served’!