The Cleansing Of Constance Brown is up and running in Cork, but not without stress. Ages ago the idea had been that, post Coventry and Vienna, with our own kit, familiar with the set and show, this would be the start of our slick get-ins.

We’re really like the Cork Midsummer Festival, so when the chance of brining the new show here came up we were keen to make it work, as a result I ended us saying yes to a venue that a more judicious soul would have declined.

Whether the room at University College Cork is too small is a matter of debate. Costumes hang from lighting stands, people are diving into cupboards to change, every conceivable crevice has been commandeered by someone to house a prop; Paul and Nina, newly conjoined twins, have been given a tec space so small their kit is stacked like an overstocked branch of Richer Sounds; we’ve built out beyond the proscenium on either side to create more backstage space and we’ve taken out the front row of seats to save people sitting on the stage; so yes, the room is too small for the show. And yet… the set fits in, twenty audience members fit in and the show looks and sounds great. So whilst we’d never want things to be this tight again, the show does fit the space.

On first arrival everyone was so shocked by the size of the space I had agreed we would perform in, no one paid much attention to the floor. We already knew it was one of those precious floors educational institutions occasionally put into Performing Arts spaces that are so precious you’re not really supposed to walk on them. Obviously tales of our massive wood and metal set and full-on physical performance thunder and lighting was making people twitchy, but we had taken measures against this. Such were the messages surrounding this floor’s current perfection and impending destruction that it was only when the wall sections started to go up that we noticed a twin pitch and yaw that would make the room a challenging putting surface. To walk from the fireplace to main door is a considerable uphill slog. Out came the spirit level and chocks, more chocks then we’d ever used before, all the chocks we had, Jake and Craig chocked as fast as Graeme could cut the wood. The resultant run of flooring looks like a pier stretching out over a sandy beach at low tide. 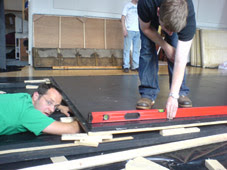 With these and other challenges overcome it was easy to forget that we also taught Andy’s role to Nick Tigg, who slotted in seamlessly and impressively. The first performance yesterday was serviceable and the second good. The team should be able to relax now and settle into a festival, which if last night’s opening bash is a good indicator, should be great fun.