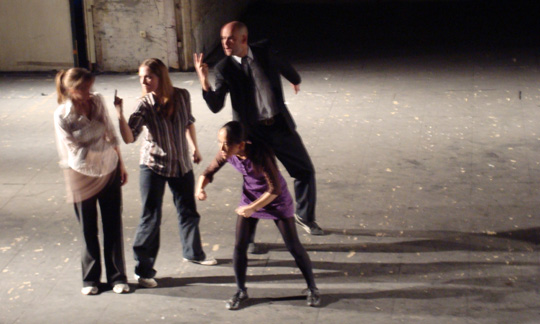 As a fundraiser for the Birmingham European Theatre Festival Temple Theatre are going to be performing their production Out Of Chaos @ A E Harris on 21st May. Doors open 19.30 show at 20.00. Tickets £10. To reserve tickets email info@befestival.org with your name and the number of tickets you require.

Some of the Stan team saw the show in Edinburgh last Summer and enjoyed it very much. Here is a message from the BE Festival team:

Please support our first festival year and join us for live music, a plentiful bar, tasty home-made cakes, and the double award-winning international show: Out of Chaos by temple theatre.

‘This audacious approach to such a serious subject matter was executed with panache and playfulness, meaning the audience was constantly laughing. Go see.’ – Three Weeks Magazine

Six people from around the world come together with lots to get off their chests – from the creation of the world to last week’s terrible tube journey.

Randy Greek Gods, feuding families and strangers on public transport go head-to-head in a fast, funny and delightfully furious hour. An anarchic blend of clowning, cross-dressing, physical theatre and music, Out of Chaos is storytelling at its very best.

[It would be great if we could get 100 folk in to raise a decent wedge of cash to make the exciting Birmingham European Theatre Festival Happening. Please spread the word] – Stan.